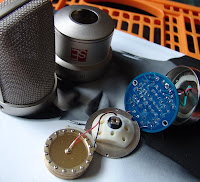 Broadly speaking, you get what you pay for.

Over the past 5 years or so the market has become saturated wth inexpensive made-in-china microphones which have brought condenser mics within the budget of home studios and, along with computer based recording, have arguably revolutionised the recording industry. But there has to be some corner cutting or trade-off in component quality or quality control, doesn't there? I picked this SE electronics 'miniSE' up on ebay for £40, which brings it in at about 15 times cheaper than the ex-demo Neumann TLM49 we bought earlier in the year. Like the neumann it is a cardioid-only transformerless mic. And unlike the Neumann, this came in a nice aluminium carrying case (as opposed to cardboard!)

On opening the case, I found the mic was rattling. 2 minutes with a screwdriver revealed that the capsule had not been properly screwed down. Also you can see that the circuit board is covered in flux. The capsule looks exactly the same as the CK12 copies found in MXL2001 mics and others. I've seen several of these now with bumps and wrinkles in the membrane. The metalwork is actually quite nice, so it may get one of the spare AKG capsules and a new circuit transplanted.