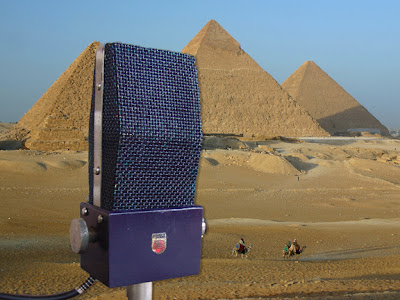 This old microphone by Philips came from a seller in Egypt - I have a vision of it being used back in the 1940s and 50's, broadcasting out in the desert, near the Pyramids and Sphinx....

The mic was in pretty bad shape and in need of a full restoration. The ribbon was broken, and it was missing a yoke and several other parts. However, it's a pretty interesting microphone and so gets to be our microphone of the month for December.

This microphone appears to be based closely on Harry F. Olson's drawings in early patents and presented in the Journal of the Society of Motion Picture Engineers, back in 1931.


The magnetic field is provided by one large permanent barrel magnet. This microphone had a measured field of about 1200 Gauss between the poles, with ribbon dimensions of 5.5 mm wide by 67 mm long. 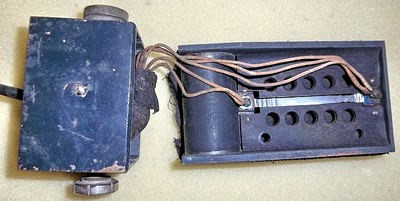 The original ribbon - sadly very oxidised - was of the piston type, with corrugations at each end and a flat section in the middle region. On closer inspection, the ribbon appears to have been designed for in-field replacement: each end is terminated in a thicker, silver-plated fold of foil, with a hole drilled for 'easy' mounting (easy being a relative term in this case). The ribbon is held in place with two brass clamps, each mounted held in place with a singe screw. The disadvantage of using a single screw rather than a pair for the ribbon clamps is that the clamp has a tendency to rotate as it is tightened, which can distort or wreck the ribbon. The clamps are soldered to wires which run to the transformer primary, and these wires are doubled (or tripled) in each case, presumably to keep resistance noise to a minimum. 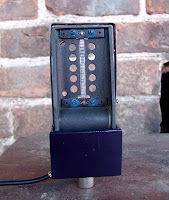 With a rewire and a new (corrugated) ribbon the microphone works and sounds rather full and rich. However, the output transformer is wound for high impedance output, and won't drive a standard mic preamp - so the microphone benefits from using an active buffer or an impedance matching transformer. Hum is also an issue with this, despite the massive brass housing.

I haven't seen another one like this - either in life or on the web. If you have any further information on this, I'd love to hear from you.
0 comments Labels: mic of the month, Philips, ribbon, vintage

Fun with magnets and an Electrovoice V1 velocity ribbon mic 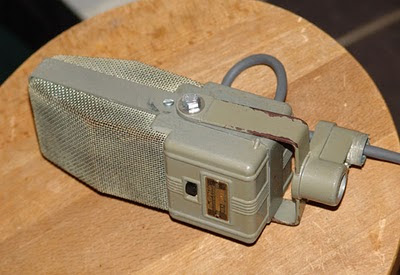 Here's an early Electrovoice velocity ribbon mic, model V1. These are great looking microphones, but the early versions are rather crudely made and this one, like many others, suffered from low output due to weakened magnets.

Bob Crowley has a few things to say about these mics - not all of them nice!

The motor of this model is based on a single cylindrical permanent magnet, clamped to a pair of metal plates which make up the pole pieces of the assembly. Because of the positioning of the magnet, the magnetic field is uneven, with a significant difference in field between the top and bottom of the motor assembly. In our example we found that the field varied from around 700 gauss at the bottom to 1000 gauss at the strongest point. This is very low for a ribbon mic, and, along with the oxidised ribbon is responsible for a low, noisy output. 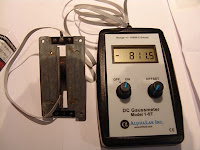 Fortunately, we have sourced some very powerful cylindrical N42 neodynium magnets of a suitable size and shape, which are a perfect replacement for the original weak magnet. 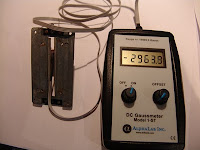 With the new magnet the field is increased by a factor of around four, to about 3000-3200 gauss, a much healthier figure which should lead to an increased output and much improved signal-to-noise performance. 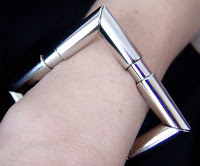 Now it's time to cut a new ribbon, reassemble the microphone, and do some listening tests. In the meantime, we made a rather attractive bracelet from some of the spare magnets.
4 comments Labels: Electrovoice, EV, magnets, microphones, ribbon

Pansy the cat has got it in for the MacBook, and launches surprise attacks like this, usually whilst I'm writing an important email, a blog entry, or leaving feedback on ebay.

At least it explains the spelling!
0 comments