Thread Adapters for RCA, Sony and other microphones

A few months ago I was trying to find some thread adapters for a customer with an old RCA junior ribbon microphone, who wanted to use it with a modern standard 5/8" microphone stand. Most suppliers were charging around $25 dollars, plus post and the inevitable import and handling duties.

So we decided to make some.

Update:
These are now for sale on the Xaudia website priced at £6.00.

If you want one, please get in touch.
0 comments Labels: microphones, RCA, Sony

Unintended poetry, via translation of a Japanese auction.

It is a rare thing. It is a microphone,
I kept it as collection with a thing handed over before,
The movement had sound then.

Please understand used goods and ask after above contents,
Understanding in clay,
I do the question as far as I understand it, but answer.

It is communication after the end, but contacts the first on the next morning,
Sorry by a private affair, but thanking you in advance,
Of the one that I am very sorry, but new one and evaluation remarkably have worse.

I will delete, although being really selfish,
In addition, if communication seem to be three days late, please let me know,
I cancel it and I do it.

It is measured for there to be many successful bids of the one,
Where I cannot totally accept communication recently,
Be heated, and there is not it with the state of things really anymore.

I am really selfish, but approve it.

False Economy a.k.a. "I can't afford to buy cheap."

Here's a little lesson that I learned (again) recently. Buying cheap, used equipment can cost just as much, or more, than buying new.

I recently found an ElectroVoice PL20 microphone for sale on a forum for $200, which translates as about £130. The PL20 is exactly the same (apart from the colour) as the much loved RE20, which is a perfect choice for recording drums, bass, vocals, brass and many other instruments. Considering that these microphones generally go for around £400 here in the UK, I thought I would grab a bargain for our studio. Even with transatlantic postage, duty, and maybe some small repairs, I should come out ahead of the game, right?

The first thing that arrived was a letter demanding a whopping payment of duty and handling for the import.

On unpacking I noticed that the microphone rattled - the capsule was loose. This is actually a common fault with these microphones - the foam disintegrates and the capsule becomes loose. Luckily, replacement foam is available for a small charge from Shuttlesound. I ordered a kit and it arrived the next day.

Time for surgery: Here is an excellent photo-journal showing how to open up an RE20. 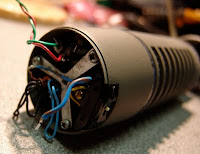 The mic comes apart easily - you need to unscrew the XLR connector at the bottom (note the screw turns counter-intuitively), and unsolder it , then undo the hex nut behind it. This reveals the wiring which can be fed through the mic body so the capsule may be withdrawn.

Also remove the grill, which will unscrew once a small grub screw has been removed. On this mic the hexagonal hole had been stripped round, and so I had to carefully drill this out and re-tap the thread.

With the mic apart I unsoldered the capsule, cleaned out dirt and deteriorated foam, and then put it all back together again with the new foam for testing.

The capsule was no longer loose, but the mic still rattled! Something was broken inside the capsule assembly. 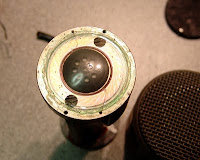 I took it apart again and took the top cover off the capsule. Inside I could see that the small black baffle behind the diaphragm had become unglued. This is not good - it can't be reached without removing the diaphragm, and this is like brain surgery.

With nothing to lose, I carefully unsoldered and removed the diaphragm with a scalpel, then re-glued the baffle and reversed the process, and tested. Sadly the 'repaired' capsule had low bass response. It was time to admit defeat and order a new capsule, which did indeed solve the problem. The mic is now back to full working order, and sounds just like the other RE20s.

For reference,  Thomann.de sell a package for £399 which includes an RE20, a stand and 10M cable.

Lesson learned.... at least for now.

This unusual Sony microphone (left) looks like the younger brother of a C38b (right) or maybe a C48 condenser mic, and shares the same high build quality and some hardware components with these mics. But in actual fact this is a high quality cardioid pattern dynamic microphone, model F-V300. 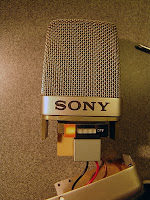 Inside, the microphone is very simple, with just a capsule in the top compartment, and the on/off switch and transformer wired to a printed circuit board below. The fixed grey output cable looks to be the same type as found on the C38b. 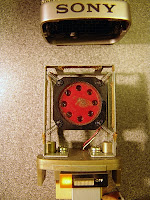 The capsule is suspended from 8 small springs to act as an internal shockmount, which seems to work well, in conjunction with the yoke, to acoustically decouple the microphone element.
This example has some traces of foam around the element, indicating that an internal windshield has at some time been removed.

The label states that the mic is nominally of 1kΩ impedance, although in practice seems lower than this and it has no problems driving standard low-Z microphone preamps. The output is strong and clear across the range, and the output is similar in level and detail to a healthy EV RE20, although with a more pronounced proximity effect.

As far as we know, this microphone was only marketed in Japan, but if you have any information to confirm or deny this, or in fact any information about this mic at all, please let us know!


UPDATE 22/2/11
This microphone has become a bit of a favourite for guitar cabs - it seems to have just the right amount of   proximity boost for that application, giving clear and solid presence to the lower end. It also makes a decent tom mic.
0 comments Labels: dynamic, FV300, mic of the month, Sony

Microphone ribbons are generally made from very thin metal foil, and aluminium is the ideal material as it is very light but also very conductive. The output of the microphone is inversely proportional to mass, and so a thicker, heavier ribbon will give a lower output, and a thin light ribbon will be more sensitive. Many manufacturers use something typically around 0.0001 inch or 2 microns in thickness. The ribbon is also typically corrugated either along the full length to prevent lateral motion, or at the ends to give a 'piston' style of ribbon. Well, that is how it should be.

However, ultra-thin aluminium is hard to get hold of, and the non-specialist may be tempted to make repairs using materials that are more readily available. Here are some things I have found inside microphones masquerading as ribbons - needless to say they were all replaced with good quality aluminium foil of an appropriate thickness!

This microphone actually worked, to an extent! It at least made a sound. The ribbon was made from an old fag packet.
Cigarette packs used to come lined with paper-backed foil - I've never been a smoker so I don't really know why, but I imagine for freshness or something. The foil is thin and already textured - it just needs to be separated from the paper. Actually this last part seems to be optional, and sometimes bits of paper are still attached, making the ribbon heavy and noisy.

1.b I've heard that chewing gum wrappers were also used for redneck ribbons, if you want a minty fresh microphone.

1.c Here's a lovely example of cigarette paper being used for a ribbon in an old GEC microphone. 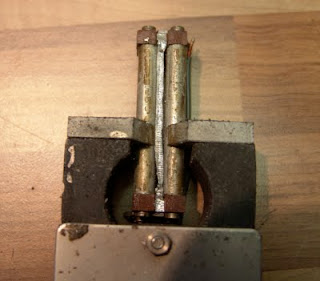 Kitchen foil is easy to handle, yet much too thick to make a decent ribbon. But that doesn't stop people trying. This is a common ebay trick... the ribbon looks in good condition, but when the mic arrives the output is low and sounds crunchy.

Plastic coated foil or metallised plastic, like that found in sweet wrappers is an interesting innovation, but is generally too heavy and has too high a resistance to make a decent ribbon. Also the plastic doesn't conduct. This microphone gave almost no signal, and it isn't hard to see why.