We have TWO microphones-of-the-month for May. Both are cardioid ribbon microphones from Beyerdynamic. We see a lot of M260 models, but the M320 and M360 are bigger, uglier and much less common too.


The M320 makes good use of plastic for the body, and has all the style of a brick! A Beyer catalogue* from 1965 called it a "heavy-duty dynamic type for show business use", and the switch allows the use to select 'music' or 'speech' settings, the latter giving a bass attenuation of 12dB at 50Hz.  Because of its appearance and a vague resemblance to the AKG D12, it is tempting to thing that this is designed for inside a bass drum. It is not. 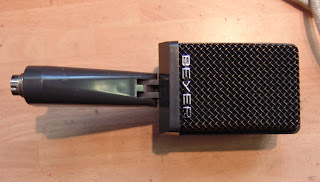 The M320 has the same motor that is found in the M260, but is connected to a large rectangular chamber below the mic via a tube. I have not been brave / stupid enough to cut open the chamber to see what is going on inside, but one assumes a series of interconnected tubes forming an acoustic labyrinth.


Although the M320 is called 'heavy duty', the M360 is much more sturdy, with a metal housing and grill. The catalog calls it a "dynamic unidirectional studio microphone with ultra-modern styling". Again, it is as elegant as a 1980s Volvo, but at least form follows function in these mics!

The M360 is slightly larger and like the M320 it also has an acoustic chamber below the ribbon motor. I was fully expecting to see the same motor in this mic as is found in the other Beyerdynamic ribbon microphones of the same era, so was suprised to find something quite different. Rather than being assembled from four small magnets glued together, the M260 has a larger cast magnet with two copper coloured pole pieces which may also be a magnetic alloy.


Although the motor is wider and deeper, it still accommodates the same size of ribbon. And the magnetic field measures around 5000 Gauss, which is similar to a 'normal' healthy Beyerdynamic motor. So I am really not sure why this uses a different motor. Perhaps it was an early production run. The transformer and switch (on/off) are housed below the acoustic chamber below the microphone. 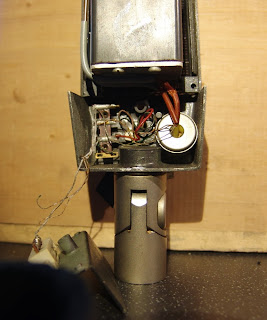 In the photo above, the ribbon is fully corrugated, but another specimen (below) had a standard Beyer ribbon, which seems more likely to be the original. 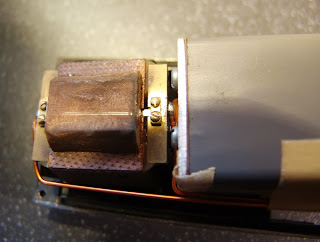 Both mics sound good when working properly, with a cardioid pickup, a relatively flat response and a bit less proximity effect than you would find in a figure-8 ribbon. They use the typical tiny Beyer transformers, which in the case of the M60 at least is wound for a full range response.

*Here is the full Beyerdynamic catalog from 1965, at the excellent Coutant website.
0 comments Labels: Beyer, beyerdynamic, mic of the month

Here is another big old dynamic microphone, this time made by Meico.


The big ferrous magnet inside the mic bring the weight up to nearly 1.5 Kg!


The badge is very cool though, and the star and wings look like it might be inspired by Soviet artwork of the era!


According to this eBay seller, the mics were made in Congleton, and they were used as announcer's mics in boxing matches. I have found nothing to confirm or deny this, so as always if you know more than I do, please get in touch!

But if it fell on your head, then it would certainly be.... a knockout. 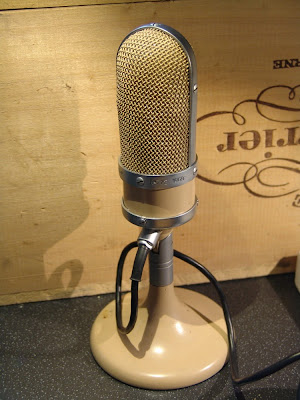 Here is an Oktava ML16 from 1968. Back in '68, man had not yet been to the moon, and you could not buy a Russian microphone in Western Europe!

The early Oktava ribbon mics are nicely designed and generally sound good, although it seems that smoke-free regulations did no apply to old Soviet studios and stations, and the old mics often benefit from a good clean and a service.

The ML16 is a bi-direction model, and the ML17 was its cardioid partner. 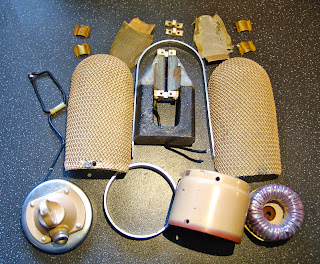 Sometimes it is easiest to strip a mic down completely and build it again from scratch to make sure everything is cleaned, tested and working properly.

At the top of the photo you can see the brass blasts shield to protect the ribbon, the internal grills and the ribbon clamps. Across the middle are the outer grills, some wiring and the motor and magnet themselves. At the bottom we have the lower housing and the toroidal output transformer. 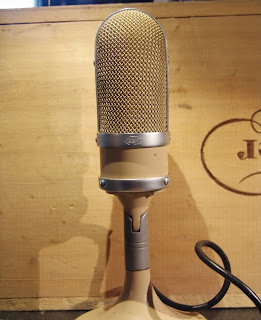 Then it can all go back together again, and with a new ribbon it works first time!
0 comments Labels: Oktava