I recently had the opportunity to test a bunch of Sennheiser MD409 and related microphones. These small dynamic microphones command eye-watering prices because they were used by a couple of famous rock bands in the 1970s.

The prices seem high for such a simple device - the microphone consists only of two grills, stem with an XLR socket, frame, and capsule, along with some foam and a couple of screws to hold everything in place. There are no transformers in these microphones, and the output runs straight from the capsule to the XLR socket. 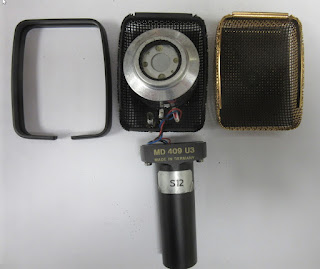 All of those parts except from the capsule are also found in the current e609 model, which is not revered in the same way and can be found new or used for less than the price of a Shure SM57 .

So the magic must be in that capsule.... right?  Similar looking capsules were used in various other Sennheiser and re-branded models, although there can be subtle differences especially in the baffle at the front and the vents in the rear. The 402/3 capsule is often mentioned in internet chat rooms as a close alternative, and so I tested one for comparison, wired into the body of a similar looking Chinese mic.

The questions I wanted to ask are as follows....

Firstly, do MD409s age well and remain consistent? In other words, if we have a conversation about "the 409 sound", are we even talking about the same sound?

Secondly, is the BF509 really the same microphone?

And thirdly, (for those of us without deep pockets), how close can you get with either an e609 or a reportedly similar alternative like the 402/3 capsule?

Tests were performed in the booth at Extinct Audio, with a swept sine wave method. Here's what we found.

1. The MD409s are very consistent. We tested five used MD409s and four of them were very close to each other, with a fifth mic showing just a little less bass. The signature sound of these capsules is a 5dB presence bump in the 100 to 200 Hz region, with a dip below 100Hz.

2. The BF509 sounds similar and the sweep and falls within the range of the five MD409 that we tested.

3. The e609 is another nice microphone but is a little different to its predecessors. It also has a low end bump, a bit broader than the MD409, and has a broad lift around 5KHz. The top end rolls off a bit earlier than the older mics, which you may notice if you haven't stood in front of a guitar amp for a couple of decades. Your dog will know.

4. The 402/3 capsule tested lacks the low end bump but shows a very flat response. It is nice but not the same.

In summary, the MD409s were consistent and the BF509 seems to be the same microphone. The e609 is a little different, but with a touch of EQ it makes a good substitute for those who can't afford the current vintage prices, or who don't want to take their precious artefact on tour.

Thanks to Sam Inglis for help with this article.