This is the 'official' wiring information from the Reslo RB brochure... 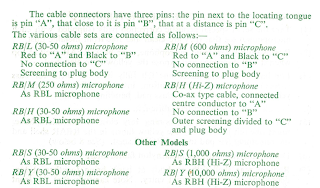 As you can see, different models had different wiring conventions and required different colour coded cables. This can cause confusion, particularly if the mic has been separated from its original cable in the 40 or so years since manufacture. The most important thing is to check the mic and cable wiring and make sure that they match!

Unfortunately, grounding the mic by connecting the cable screen to the body of the plug does not work well, and these mics are prone to hum. For the low impedance models, it seems sensible to use pins A and B for the balanced output, and pin C for ground. The ground must also be connected to somewhere to the body of the mic and/or to the shell of the cable.

The dual impedance models are particularly problematic, in that pins B and C were used to select either low or high impedance output. This means that if one pin is used as a ground then one part of the transformer will be grounded and some of the signal lost. It is therefore important to disconnect the high impedance leg inside the mic and rewire to match the cable.

Here is how we wire our Reslo microphones and their cables at Xaudia - with equivalent XLR numbers. 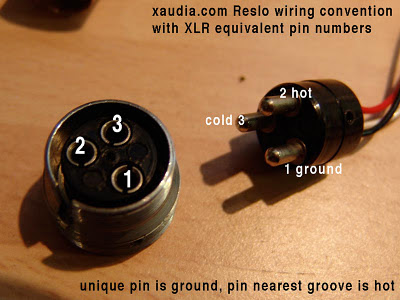 Most 21st century users want a balanced, low impedance output with good ground connection, preferably with an XLR connector at the other end of the cable. Pin A (hot) becomes Pin 2 at the XLR, Pin B becomes Pin 3, and Pin C (ground) becomes Pin 1.

Roddy Bell has written a very useful guide to Relso wiring, which can be found here.

So what's in a name? Some of these microphones have two manufacturers' names on them: RSA is proudly embossed on  the aluminium body of the mic, whereas the switch plate reads 'Type RL1, H. Selmer & Co. Ltd., London, Made in England". Others have RSA on the switch plate too, although these seem to be less common, and I have only come across one example of this.

According to the Vintage Hofner website, Selmer took over the R.S. Amplifiers Ltd in 1947, and presumably these schizophrenic examples come from around that time, when the new owners were using up the cast casings. They are are made from a big slab cast aluminium, with a chrome grill. They are mounted by a yoke with a switch in the base, and the black paint with bare aluminium stripes gives it a very distinctive Bauhaus* / Art Deco appearance.


The main body of the mic contains the ribbon motor assembly, hidden inside a cotton bag, and a large iron core transformer with a very thick double (parallel) primary winding. The secondary winding connects to a short length of cable, which goes off to the switch.

One thing to note about these mics is that many of them are designed for a very low impedance. The relatively thick piston style ribbon and low ratio transformer combine to give an output impedance of around 15 ohms (measured at 1kHz), and so they can seem very weak when plugged into a modern preamp.  In this case a matching transformer is essential to get a decent level from the mic.

Also, these mics do not generally have a secure earth connections, and may hum unless one is provided. Fortunately, it is a simple job to add a terminal to the inside of the body.


In terms of sound, these have a very vintage tone and limited bandwidth, rolling off rapidly above around 4kHz - perfect for an old AM radio broadcast effect.


The RL1 was eventually replaced by the fully Selmer-ised RL2, which used the same grill insert. The RL2 seems to be a very rare thing indeed.

* The design school, rather than the goth band. Although either might apply.

My holiday project was assembling this Telemaster guitar, from parts acquired that I have accumulated over the past six months or so.


The 'Telemaster' is an imagined product that Fender might have made in the 1960s or 70s, but never did - it is essentially a Jazzmaster body with Telecaster hardware. In this case I used a neck with a Strat-style headstock, and added a Fender-badged Bigsby vibrato, simply because I love the Bigsby sound.

The ash body & scratch plate were made and sprayed by John Manuel of Carlisle, who did an amazing job with a nitrocellulose transparent white - it really shows the lovely grain below. He can be contacted through ebay.

The neck and locking tuners were from Vanson guitars. The neck is pretty nice quality, although I did need to rub it down with some very fine abrasive paper to remove a couple of rough spots in the varnish. I found it slightly chunkier in profile than an original Jazzmaster neck.


One thing that I don't love about Bigsbys is re-stringing them. The ball ends of the strings have a tendency to slip off the metal posts, which can be very frustrating, and one really needs four hands for the job - to hold the string at both ends, keep in under tension, and turn the tuner! Two things help with this - firstly locking tuners clamp the string at that end, and also I have fitted a Duesenberg super tremola kit, from Rockinger, which replaces the posts with a through-hole system. Much less frustrating!


The pickups are of course home made, and I tried to get as close to the original Telecaster specs as I could. Rather than using a bobbin/former to wind the coil, the core of the pickups were made using top and bottom 'flatwork', glued to Alnico rods. Enamelled wire was then wound directly onto the magnets, which avoids the gap between magnets and wire that is inherent with a plastic former.

The bridge pickup was wound with 8500 turns of 42 gauge wire, and the bridge was reverse-wound with around 6500 turns of 43 gauge, and of course reverse polarity for the magnets.  Once wound, the pickups are wrapped with string to protect the delicate coil, and then dipped in wax to stop microphonics. The whole thing is very solid, and rather heavy. 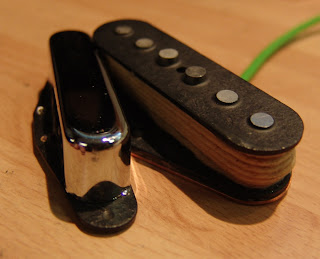 I did briefly consider adding a headstock decal to complete the fake Fender look, but decided that it was too good to give anyone else the credit - so it has a nice Xaudia badge. I am rather proud of it! :)
2 comments Labels: Coil winding, Fender, Guitar, pickup 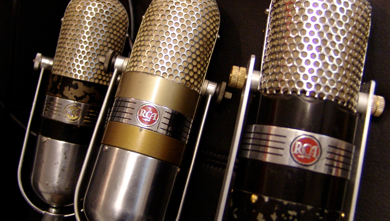 Although we have been fixing ribbon mics for our own studio and a few customers for several years, 2011 was the first year that we went public and began to advertise the re-ribboning service. The mic repairs were moved to their own special room, with a dedicated testing chamber. The other big development was the acquisition of our Meteor coil winder, and the decision to do transformer repairs and re-winds in-house. This has vastly expanded the services that we can offer.

In 2011 we repaired some 186 microphones, along with a few guitars, amplifiers, reverbs, DI boxes and so on.


The various models of Reslosound mics have been the most popular brand - there are still a lot of these around kicking around in Europe, and we serviced 37 of these in 2011. As one would expect, there were also quite a few RCA ribbon mics - 23 passed through our hands this year.

We would like to thank all of our customers for helping to make this such an excellent and fun year, and we look forward to even more exciting things in 2012.