Lately I've had the opportunity to play around with several vintage Neumann Gefell tube microphones - a CMV563 (below with UM70 capsule) , a M582 and a pair of UM57s. 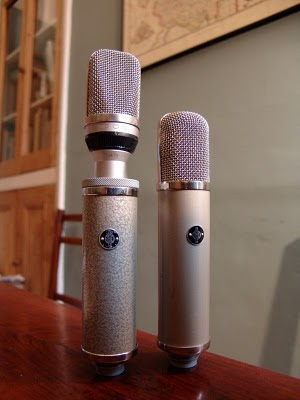 These all have broadly similar circuits, with a EC92 tube and transformer coupled feedback. The UM57 is configured for different polar patterns, whereas with the CMV563 and M582 you have to swap the capsule. There are other differences - the schematics are shown here.


One particularly common fault with examples of these microphones is that the original electrolytic output capacitor can dry out with age. This is by no means always the case, and the capacitor in the UM57 on the left above was in perfect condition after nearly 50 years!  The one on the right has been replaced with an orange modern metalised film capacitor.

Part of the circuit is shown inset within the chart. Although intuitively we expect the smaller capacitor to give us less bottom end, the network of the capacitor, transformer primary winding and resistor acts as a resonant filter, producing a peak in the bass region just above a sharp drop off. The human ear can perceive this as more bass - although not necessarily in a good way: the microphone may seem muddy or lack clarity.

So, having a good quality capacitor here is vital, and the value of this can be used to tweak the bass response if desired. Of course this analysis is just for the tube circuit inside the mic and does not consider the effects of ageing on the capsule itself - that's a story for another day.

This is the label on a reverb pan found inside a vintage Roland Space Echo SE555. “Manufactured by beautiful girls in Milton, Wisconsin, under controlled atmosphere conditions." Right! And you thought they were made in Japan by robots, didn’t you?
0 comments Labels: pro audio, vintage

Recording with the Josephson C720

Back in August we were lucky enough to get our hands on a special edition Josephson C720 microphone for the studio, one of only 20 made in the first production run, and having lived with this for nearly half a year it’s probably about time we reviewed it.

The first thing you notice about the C720 is its size - this is one big mic, U47-big, and makes a big bold statement in the live room or vocal booth - it’s built like a tank and it definitely has that ‘wow’ factor which gets the artists talking.
The next thing that grabs your attention is its radical aluminium metal-foam headbasket, which looks like something you could scrub your pots and pans with. The non-periodic headbasket is actually designed to eliminate internal acoustic reflections and refraction of soundwaves, avoiding comb-filtering effects and so giving a more realistic recording.
The third thing you notice is that it has two XLR outputs. Like many condenser microphones, the capsule has dual diaphragms which can be combined in different combinations to give cardioid, omni, figure of eight patterns. Unlike most microphones, the two transducers have separate head amplifiers and separate outputs which means that the signals from opposite sides of the microphone can be recorded separately and mixed together, either in phase or with the polarity reversed, at a later stage. What this innovation means in practice is that you can pick the polar pattern after recording, which might be used to eliminate unwanted sound sources by rotating the null point of the microphone. Also, and more importantly in our studio use, with close-mic’ed sources such as vocals you can dial in more or less proximity effect, making a singer seem bigger, darker or lighter and brighter.
So what does it sound like? Possibly because of the lack of head basket comb filtering, and the facility to tune the pattern and proximity effect, this is a very versatile microphone. The one word that sprang to my mind in describing the sound, whichever pattern you pick, is ‘solid’.*
Another thing we’ve noticed is it sounds pretty damned good on pretty much anything you can throw at it. Because of it’s ability to handle high sound pressure levels and become a go-to mic for low end stuff, and is rock-solid on bass guitar and front of kick drum, but it’s just as handy on both male and female vocals - especially those with a tendency to get loud when they belt it out. Vocal recordings are up front, sound as they should, but without the top end brightness of, say, our TLM49.
Furthermore, it can be used for more radical effects by compressing or reverberating one side of the capsule only. For example, I had some interesting results on a male rock vocal by compressing the signal from the front capsule, mixing together with the phase reversed rear capsule, then compressing the sum of these. The effect was that as the vocals push harder, the relative amount of rear capsule included becomes greater giving it more of a hypercardioid pattern, balancing the tendency of the vocalist to step back from the mic when belting it out. With a bit of creativity the possibilities are endless.
Overall this is a brilliant, radical piece of thinking and and one of those bits of gear that comes into your life and is there to stay.
*After writing this I read another review of this mic which used exactly the same word - ‘solid’ - to sum up the sound.
0 comments Labels: microphones, pro audio, recording

I seem to spend half my life looking for unusual bits to get old things working again, either for my projects or for other people. Which is why seeing this kind of thing drives me nuts.

Can I make a plea for all sane people out there not to break up vintage microphones and other equipment unnecessarily?
On ebay at the moment there's a nice classic RFT CV7049 tube microphone sold without the hard-to-find connector, and then the connector for the mic sold separately just to try and make an extra couple of bucks (same seller of course). It's like selling a classic car and the wheels separately. And it's not the only example - you can find half a dozen similar things going on at any time on ebay. What’s the obsession with breaking up sets of vintage equipment?
I'm not even sure the sellers strategy works - Surely the two things belong together, and are ultimately more valuable as a pair? I certainly would bid more for a bit of vintage equipment knowing that at least the bits are there for us to get it up and running. And I would shy away from buying something like that, only to lose the connector to another bidder.
Once these things get broken up it's really hard and expensive to bring them back together again. It's just destroying antiques really.
The other thing that occurs to me as I write this, is that if a microphone or some other thing is broken up in this manner, one should assume that it is also broken in a functional sense. The equipment cannot be tested by the new owner and verified as working if, when purchased, it lacks a capsule, tube, connector or some other hard-to-find yet vital organ. So if it is broken up, it’s broken down. And one should bid accordingly.
0 comments Labels: microphones, rant, tube mic, vintage 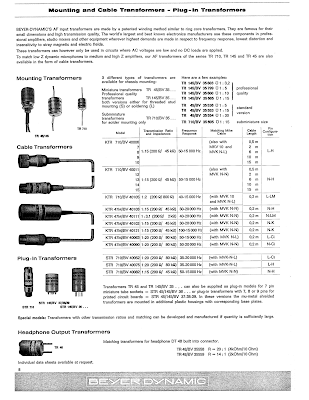 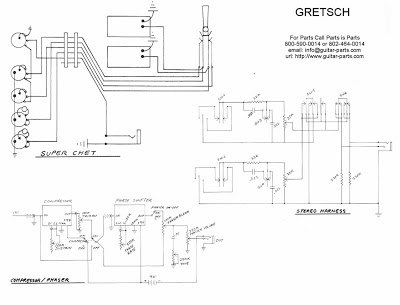