It is said that imitation is the sincerest form of flattery. If that's true then the RCA 74b junior ribbon was one of the most flattered microphones ever made! 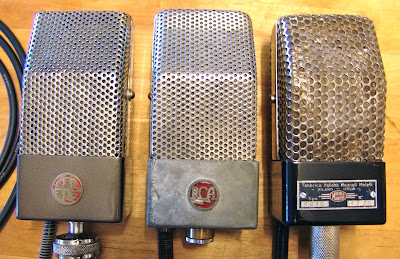 In the middle is a 'real' RCA 74b and on the right is a 74b made under license in Italy by Magneti Marelli. But what's that on the left? It's our microphone of the month, and I don't know what it is.* 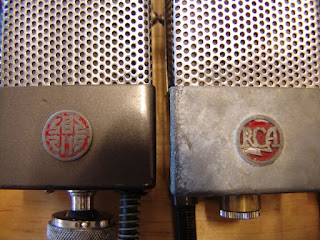 When I first saw this I thought it must be another rebadged or licensed 74b. The outer dimensions are almost identical to the real thing, and it even has a red 'meatball' badge, although this time with some unidentified Eastern-looking symbols - perhaps from somewhere in South East Asia.** It even has a good copy of the swivel stand mount.

But inside the mic there are some differences. The ribbon has similar dimensions, but the magnet assembly is quite different, with two large, strong horseshoe magnets providing the field through a pair of U-shaped pole pieces.

In a 'real' RCA 74b, the magnets are at the front and bevelled, with a rectangular frame at the rear.

In the photos above the transformer is a replacement. The original transformer, below, was faulty, probably due to insulation breakdown. Again, the marking on the transformer looks very Eastern in style, and appeared to have been written with a brush, in eastern style. 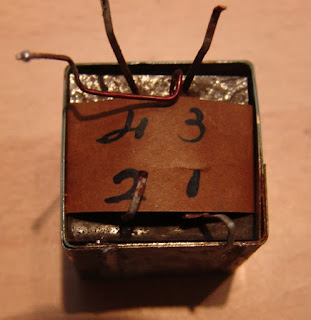 Perhaps the oddest thing about this microphone is that it has been shot! There is a pellet embedded in the side of the mic. Perhaps it was used as target practice. Or just maybe it was in use at a radio station in the last days of Saigon....

*Thanks to John Gooding!
** I have tried to identify these but no luck yet!

A couple of readers have sent in messages about the provenance of this microphone....

"My friends here in Thailand says the symbol is almost definately Chinese. It is certainly not Thai, Vietnamese or Cambodian. By most stuff here has been made in China since China started making things, so your Saigon theory is still the best." James Browne, Hungry Ghosts

"Hi Stewart. Sent picture to my factory in H.K, the marking is definitely Chinese," Andy Hearn, ECM
---------------
Update, 15 June 2022 (ten years later...)
Thanks to Adam Pan from Taiwan for providing this additional information and photographs.
"The first photo left one ribbon mic is make by Shanghai Microphone Factory in 1940's.
After a long time looking for some China made microphone. when I move to live in Shanghai China from 2001, I found two ribbon microphones in China, one is the same as yours, the logo is the word “Ding”(鼎) in chinese, that is “tripod” the meaning is “one word is as heavy as nine tripods”. Reminder to "keep your word". And the other one’s logo is “He-Ping”(和平)，That meaning is “Peace”.
A few years ago, I helped Superlux develop some products, and I met an older engineer who is retired, He was involved in the manufacture of Type 74 microphones at the Shanghai Microphone Factory." 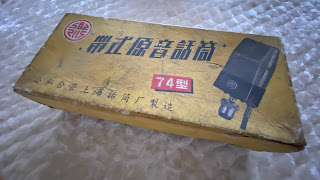 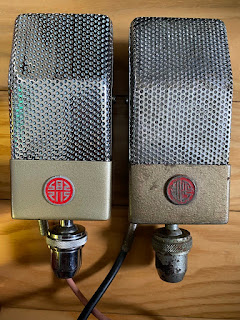 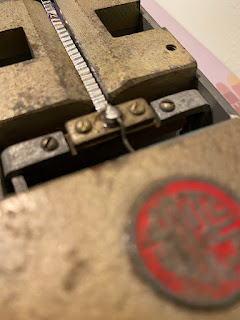 One of the great things about being a micro-business is that you can act quickly! There is no management structure, no liaising with a marketing or accounts departments - we don't have them! And best of all, no office politics! This means that if we have a good idea, or even a stupid one, we can do it straight away.


Last month we made a stereo guitar pickup prototype, and it was fairly clear from our customers and comments on forums that a few people might want one. So now, six weeks later, we have a 'production' version in a humbucker sized* can - the Hexapup!

The hexapup is actually made of six small pickups, and can be wired for mono, stereo or hexaphonic output

Mono
When wired as a conventional mono pickup, the hexapup has a bright single coil tone. But it also has hum rejection (humbucking) properties because the coils on one side are reverse wound, with reverse magnet polarity.

Stereo
There are two obvious ways for stereo wiring. Either bottom-and-top, or alternating strings. Put another way, the lowest three strings can be sent to one output, and the highest to the other, so power chords could have one sound, and solos another. Or, the E, D and B strings sent to the left, and A, G & e to the right. This makes for nice stereo width, and is great for multi-tracking chords, and chorus type effects. I have my guitar wired this way!

Hexaphonic
Each coil can be given its own output, volume and tone control which, with series / parallel and phase options gives a staggering number of combinations. Each string can be sent to a different distortion or delay to  get strange new sounds, and could even be auto-tuned or pitch shifted separately - that might be weird. With six outputs, imagination is the only limit!

We currently have some big introductory discounts on the first production run, so please get in touch if you want one.


I'll be writing a bit more about the technical specs in a couple of days, so stay tuned.

* Actually a little deeper than a normal humbucker, but most guitars have plenty of space.