A pair of Oktava MK18 condenser mics have been knocking about the workshop for a few years. Both mics had similar faults, with weird inconsistent dropouts especially when changing patterns. I suspected leakage somewhere but could not track it down. The capsules seemed OK but the mics were unusable as they were, so I put them to one side and waited for inspiration to strike

The MK18 is an ancestor of the MK219, so when I came across some circuit boards from Russell Technologies designed for the MK 219, it looked like the perfect opportunity to revisit and rehabilitate these microphones.


The boards are nice quality and arrived with full instructions, which makes assembly very easy - or at least it would be with the intended MK219. In the case of the MK18 there is some hacking to be done.

The capsule mount in the MK18 is longer than that in the MK219, so it needed to be chopped, milled and drilled to fit the board. The MK18 also has a 5 pin DIN output, which was drilled out on the lathe with a 19mm bit to make room for an XLR socket.

That done, I discovered that I had lost, sold or binned the original transformers. However, I found a pair of spare BV107s (from Neumann KM84s), which fitted nicely.


I omitted the pad and high pass control switches. And I went for cardioid pattern, using just one side of the MK18s double sided capsule, although it would be easy to wire both sides of the capsule in parallel to have an omni pickup.*

Against the popular tide, I also added a layer of fine stainless mesh, to keep dirt and damp air away from the capsule. These mics are bright enough, so I am happy to risk losing a fraction at the top end.


The result is good. I like the sound and I think they would make a nice pair of overheads or stereo instrument mics.

*Or even figure-8. I will let the reader think about that one. ;)
0 comments Labels: condenser, Oktava 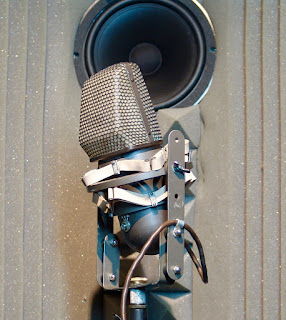 A bunch of new vintage microphone impulse response files have been uploaded to the MicIRP blog.

These include an RCA KU3a, Gaumont-Kalee 1492 and a bunch of other ribbons, plus some trashy dynamics for fun.

Thes files are for use with convolution reverb plug-ins such as those found in Logic and Pro-tools. I have been using AudioThing's Fog convolver, which works well.
0 comments Labels: MicIRP