The Fostex printed ribbons are rather odd microphones, using a membrane with a metal track suspended in a magnetic field to generate the signal. Although they have a natural figure of 8 response, their sound is more like a moving coil dynamic than a 'true' ribbon microphone.

This one was probably once used as a donor mic to fix a broken one - it arrived without a capsule assembly.


Sadly, Fostex UK were unable to supply a replacement part, so for now at least it has been converted into a Frankenphone ribbon mic.


I used a spare ribbon frame from a Reslo mic, with a pair of small neodynium magnets glued to the frame, which gave a field of around 6000 Gauss (normal Reslos are around 4000 gauss). The new ribbon assembly fitted neatly into the old mount, needing just two strips of foam to hold it in place.


The Fostex transformer and filter switch were still present, but were designed for the Fostex printed ribbon capsule, and are unsuitable for a 'real' ribbon microphone. I wound a custom 1:34 transformer for the job, which works nicely. The mic has a full range output and sounds pretty good!
0 comments Labels: Fostex, Frankenphone, Reslo

This month's MOTM is the Reslosound SR1 Studio microphone, which was a big brother to the RB models, and was Reslosound's top of the range ribbon microphone. They are nice sounding figure-8 ribbon microphones, and are very much less common than the RBs, and have become quite desirable amongst collectors and studio engineers. Often they came in a stunning bronze colour with matching plug, like the one above. 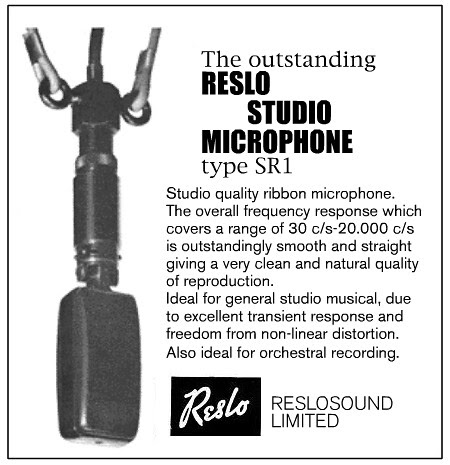 The advertising at the time claimed 30Hz to 20kHz - although doesn't qualify that with a dB range.


Extra sensitivity comes from using a longer ribbon and an extra magnet, and the mic is consequently about 1/3 as long again compared with the more common RB. By necessity the SR uses a different ribbon frame from other Reslo microphones. The mic below came complete with its original fibreglass stuffing -  which protects the ribbon, damps any ringing of the shell, but seems to muffle the sound a little.


The RB microphones are quite notorious for grounding problems, as the mic body is only grounded through mechanical contact at the plug. The SR1 deals with grounding in a better way. The output socket has a hole drilled in the centre with a small wire pushed down and soldered to one of the lugs (see photo, by the green wire). When the mic is reassembled, the long screw that secures the connector makes firm contact with both the mic body and the central wire, giving a good solid ground. This works well, and I now use this approach to ground troublesome Reslo RBs too.

The SR1 was available in both 30/50 ohm and 250 ohm versions, and used the same laminations and bobbin as the later RB transformers, but with a more sophisticated winding configuration. The SR1 transformer has a 5-winding construction, with two primary windings alternating between three secondary windings.

We can supply reproduction SR1 transformers on request.

Thanks to David Pumple for sharing photos and information. The SR1 advert is from http://reslosound.blogspot.co.uk/.
1 comments Labels: mic of the month, Reslo, Reslosound, ribbon, transformer