This month's MOTM is the Gaumont-Kalee model 1492, 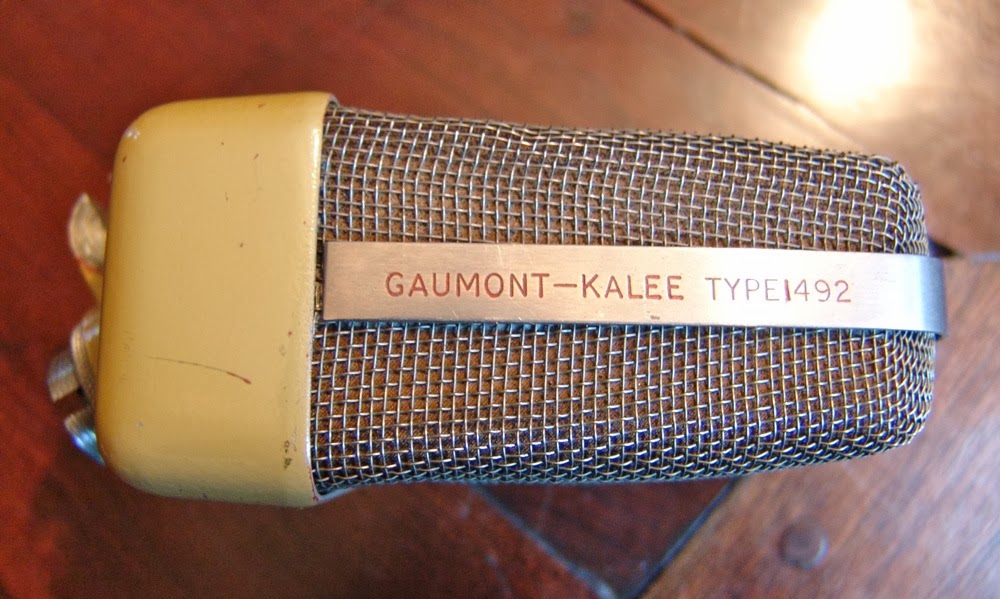 ….made by British Acoustic Films Ltd. 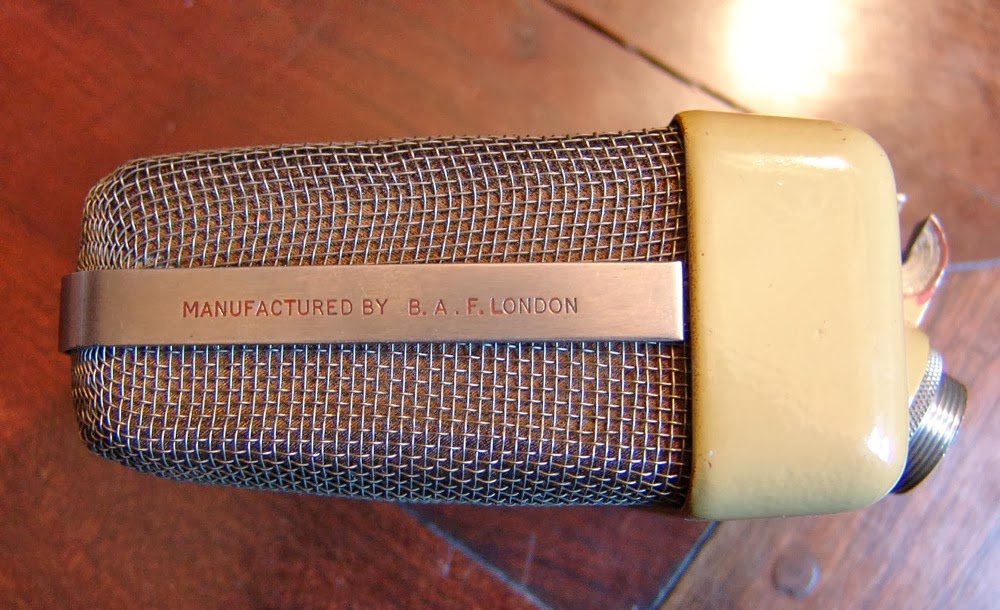 Both GB Kalee Ltd. and BAF Ltd. were subsidiaries of the parent Rank Organisation, which owned various other companies associated with the film industry, including Odeon Cinemas. 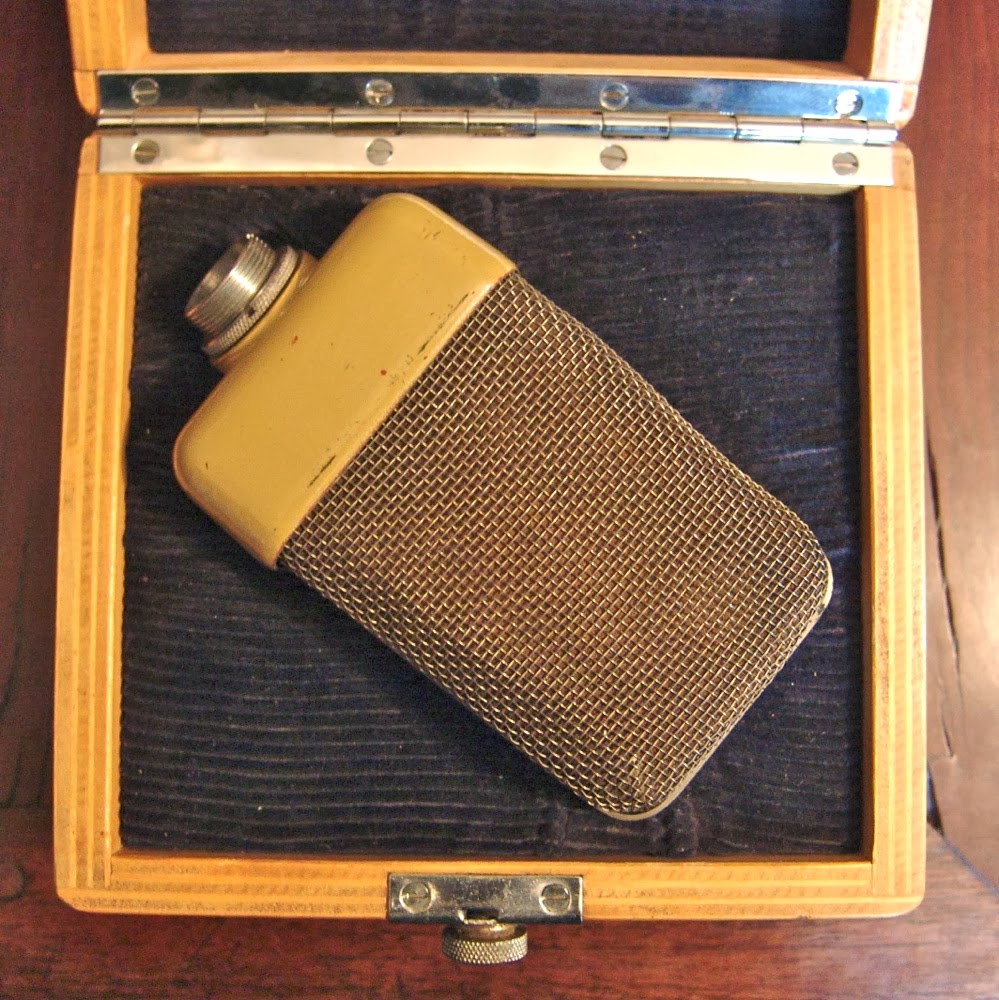 Back to the microphone - this specimen comes in a nice wooden box, and although is painted in a rather drab shade of mustard yellow, there is something pleasing about its proportions and utilitarian design. The grill has a coarse outer later and a very fine layer of woven wire inside.  It is designed to sit on a boom mount, like this (nicer looking) gold-painted example from Pinewood studios. 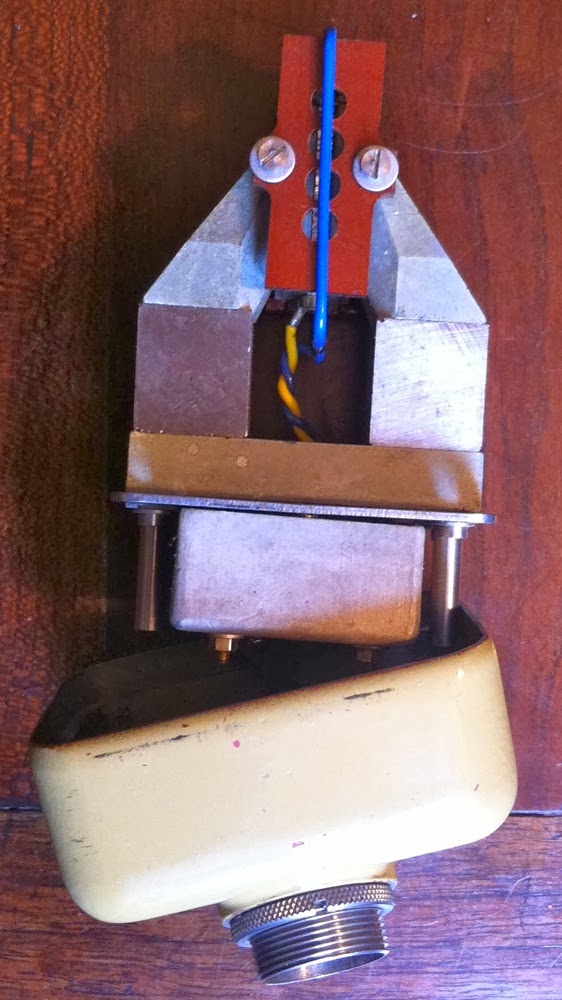 Sadly we don't have the mount, but as this shares a connector with the Reslosound mics, we can use a Reslo stand mount for it. None of the other parts are common to the Reslos, so they must have just sourced the connector from them. 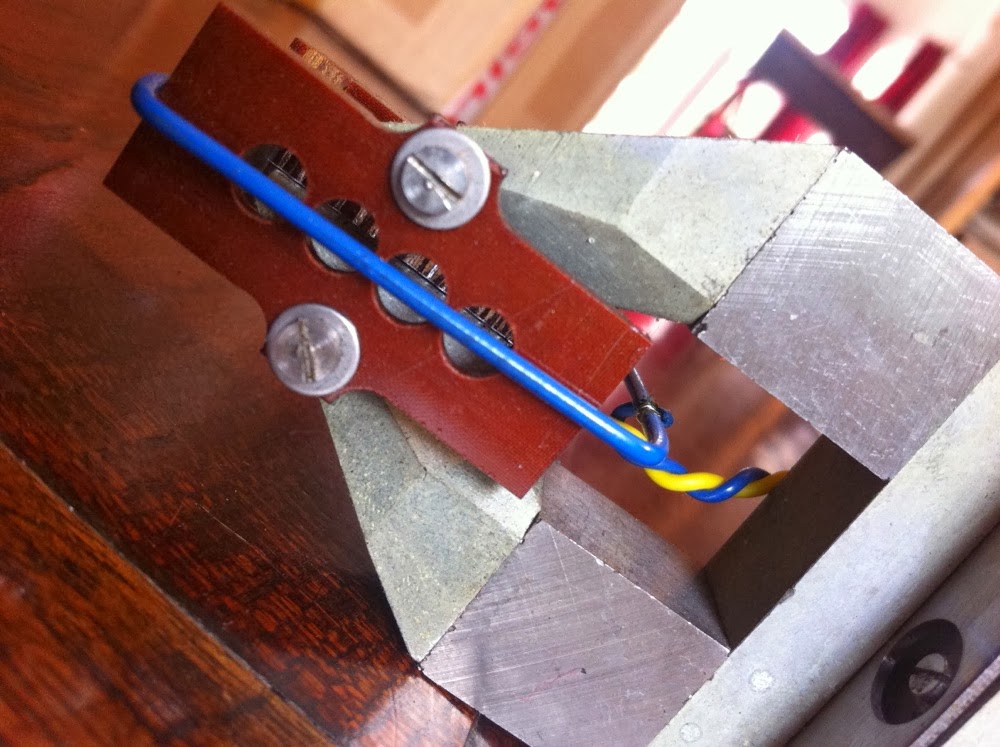 Inside, the mic is a fairly conventional figure-8 ribbon mic, but has added baffles both sides of the ribbon, and thick wires run from the top ribbon clamp, giving some blast protection along the way. 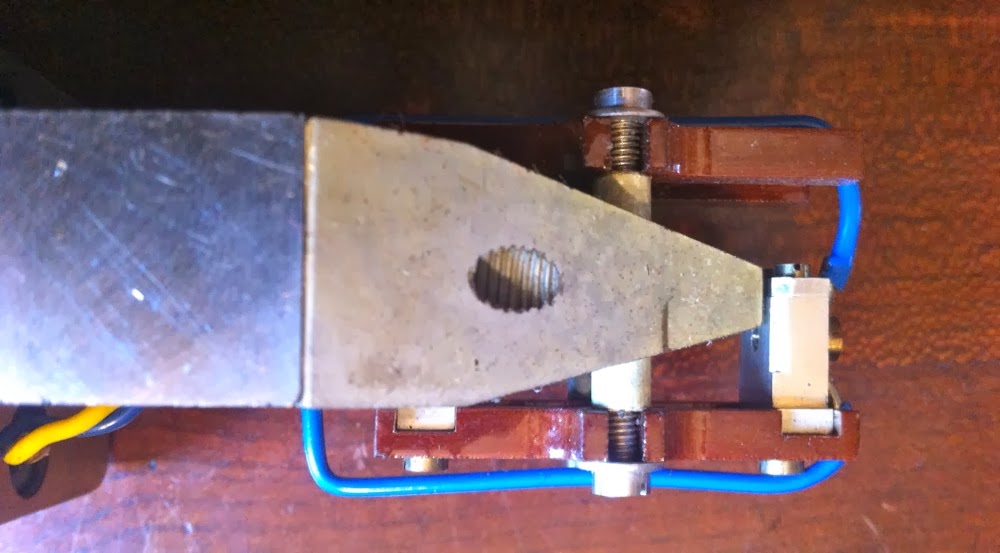 The ribbon motor uses tapered triangular pole pieces, which compensate for the decrease in magnetic field with increasing distance away from the two block magents, and ensure a more even magnetism along the length of the ribbon. 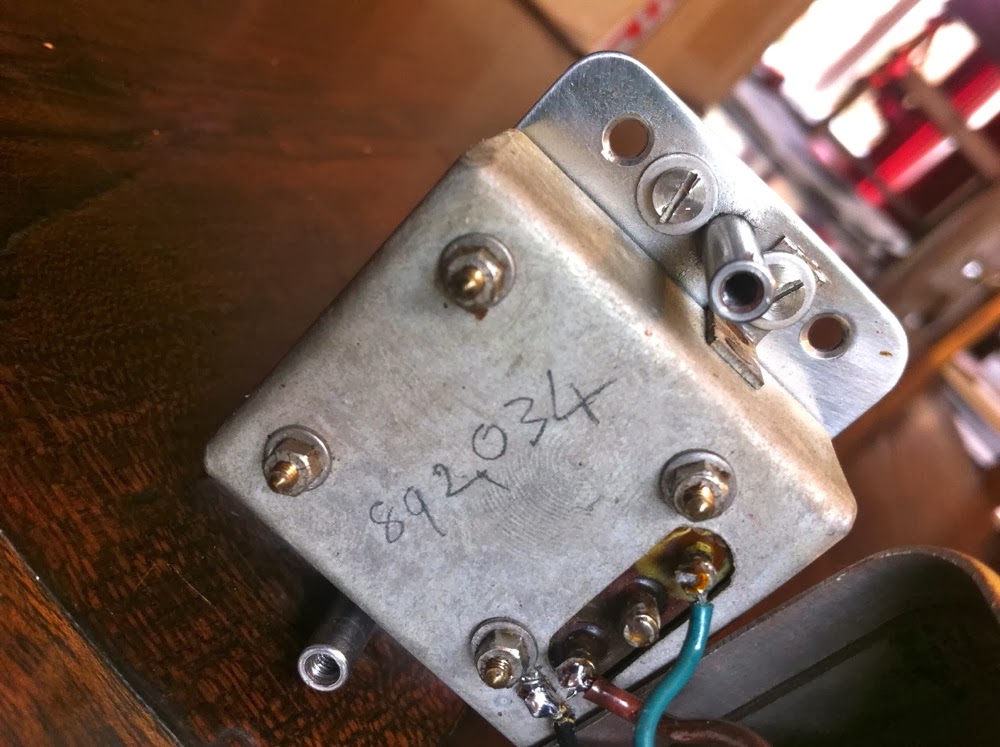 And of course there is a suitable transformer in the base to convert to a sensible impedance - in this case 50 ohms. The mic sounds rather nice, rich and dark close up - it may make a vocal session very soon!
0 comments Labels: BAF, Gaumont-Kalee, mic of the month 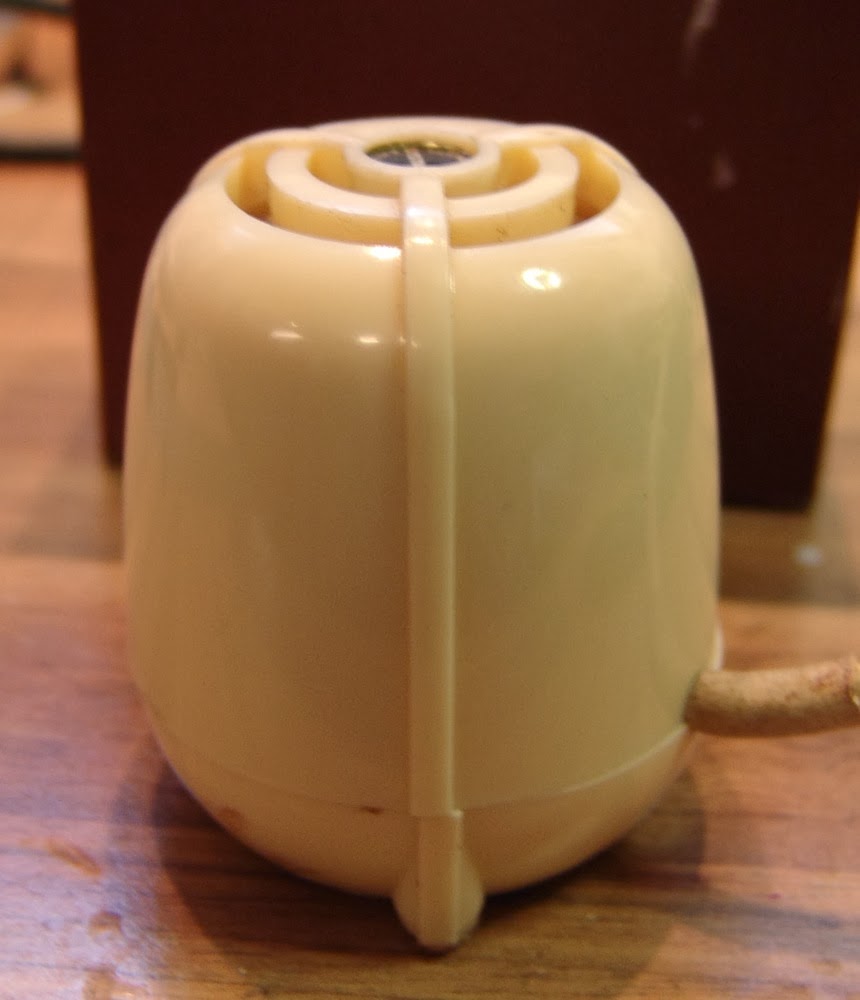 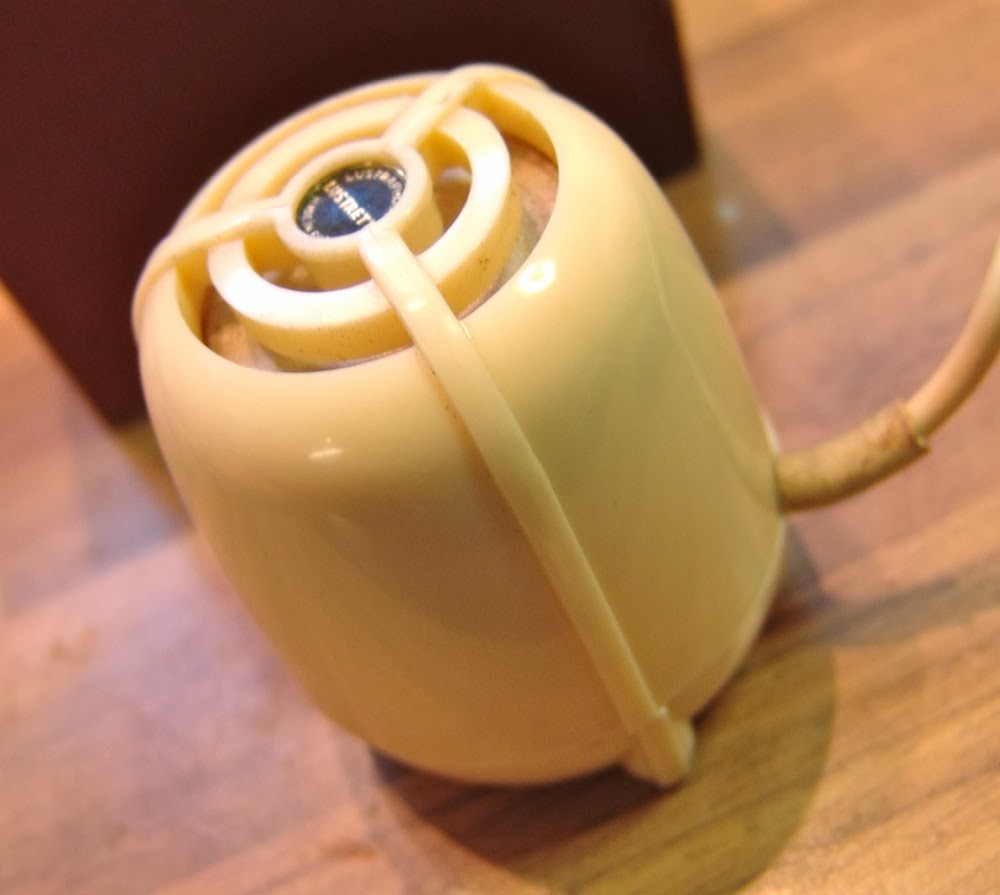 I picked this one up with a couple of crystal microphones, and for a long time I had wrongly assumed this to be a crystal too. But when I opened it up I found a dynamic capsule and step-up transformer. I should have guessed from the model number - 'D' usually means dynamic.  In fact it features in a Lustraphone product catalogue that I posted earlier - so I have no excuses!

The mic comes in a stylish box, with a picture of the mic, so you know what you're getting. 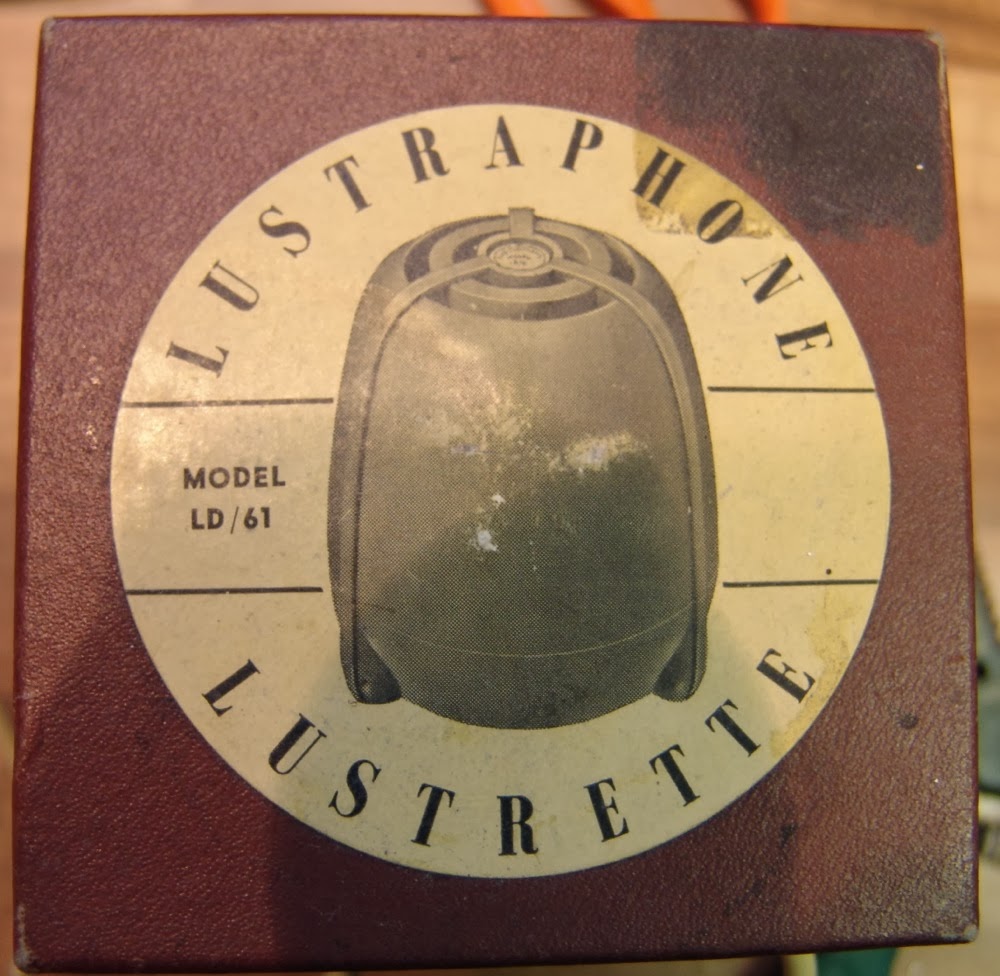 The dynamic element looks similar to the one found in the more common C51 model, and it is possibly the same mic in a different package.
0 comments Labels: dynamic, Lustraphone

...I'm gonna take my Ribbon to the United Nations….

Back in 1954, Bang and Olufsen BM3 ribbon mics were installed in the United Nations building in New York . The mics were chosen for their lack of feedback, and are clearly visible in these video clips of  Lester Pearson speaking about the Suez crisis.

B&O were justifiably proud of their mics being chosen for the UN - here is a document from the time... 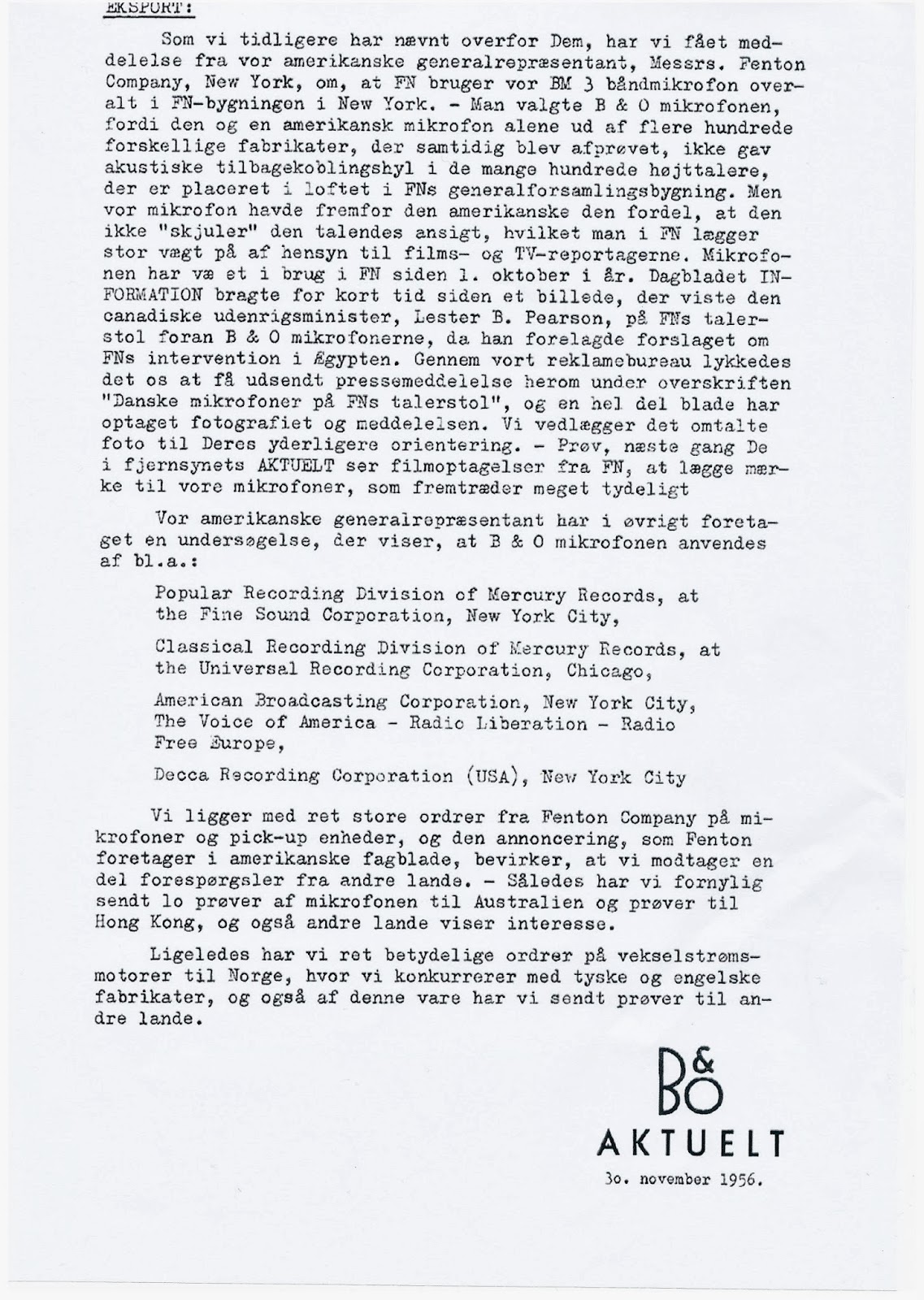 And a translation from the Danish….

"As we previously mentioned to you, we have received a message from our US representative, Fenton in NY, that the UN uses our BM3 microphones throughout the UN building in NY. They chose the B&O mic and an American mic because only they, out of several hundred different manufacturer products that were tested, did not give rise to any acoustic feedback in the several hundred loudspeakers that are mounted in the ceiling of the UN general assembly building. Our mic also had an advantage over the US product as it didn't hide the speaker's face, which is important with regards to film and TV reporting. The microphones have been in use in the UN since 1st October this year. The newspaper INFORMATION recently had an article with a picture that depicted the Canadian foreign minister , Lester B. Pearson , at the podium in front of B&O microphones when he presented his suggestion for involvement in Egypt. Via our advertising bureau we managed to send out a press release under the title "Danish microphones at the UN podium", and a whole selection of magazines included the picture and advertisement. We have attached the picture for your information - Next time you see the program AKTUELT in TV with recordings from the UN building, take note of our microphones, they are clearly visible.

"Our American representative has also undertaken an investigation that shows B&O micophones are used at, amongst others:
[Mercury, ABC and Decca]
"We have large orders from Fenton conmpany for microphones and pick-up units, and the advertising that Fenton performs in the American technical journals has the effect that we receive requests from other countries. This has resulted in that we have recently sent 10 samples to Australia and samples to Hong Kong, and other countries are also showing interest.
"Likewise we have significant orders for AC motors from Norway, where we compete with German and English manufacturers, and samples of this product has been sent to other countries.

Woo! We have just hit 100,0000 blog views. Amazing, and worth grabbing for posterity. Some Bang and Oulfsen BM5 stereo ribbon microphones are prone to hum on one channel. This is because the top half of the mic rotates around a plastic collet ring, but is only grounded through contact to the lower half of the metal body. With time and use, the contact between the two halves becomes loose, and the upper body is no longer grounded properly.


The problem only occurs with early versions of the mic. Later, B&O recognised the problem and re-designed the mic's rotating ring giving it an additional metal lip, so that the upper mic rotates around metal, ensuring good grounding contact at all times.

If you have a an early mic, in most cases the hum issue can remedied by improving contact between the parts as follows. Here are some tips, but remember that there is a delicate ribbon inside, so go slowly and if in doubt send it to someone more experienced!

1. Carefully remove the top half of the mic, and loosen the two grub screws at the base with a screwdriver of the correct size. Don't lose these little screws - if you do then they are M2 thread! 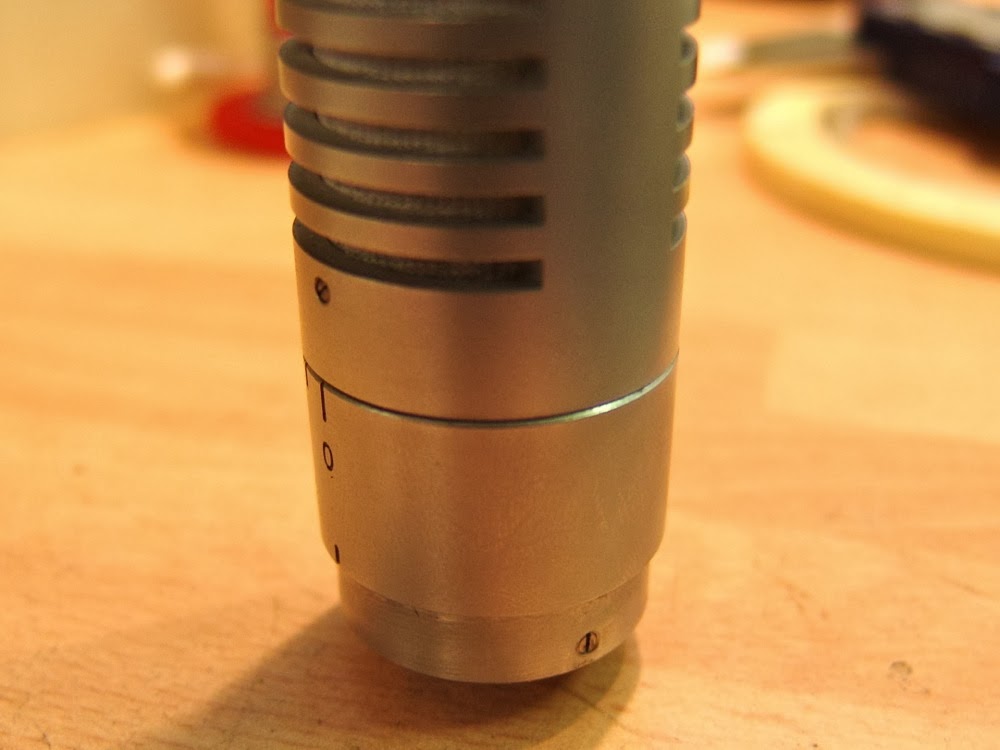 2. Slide off the ring and put the rest of the mic somewhere safe. 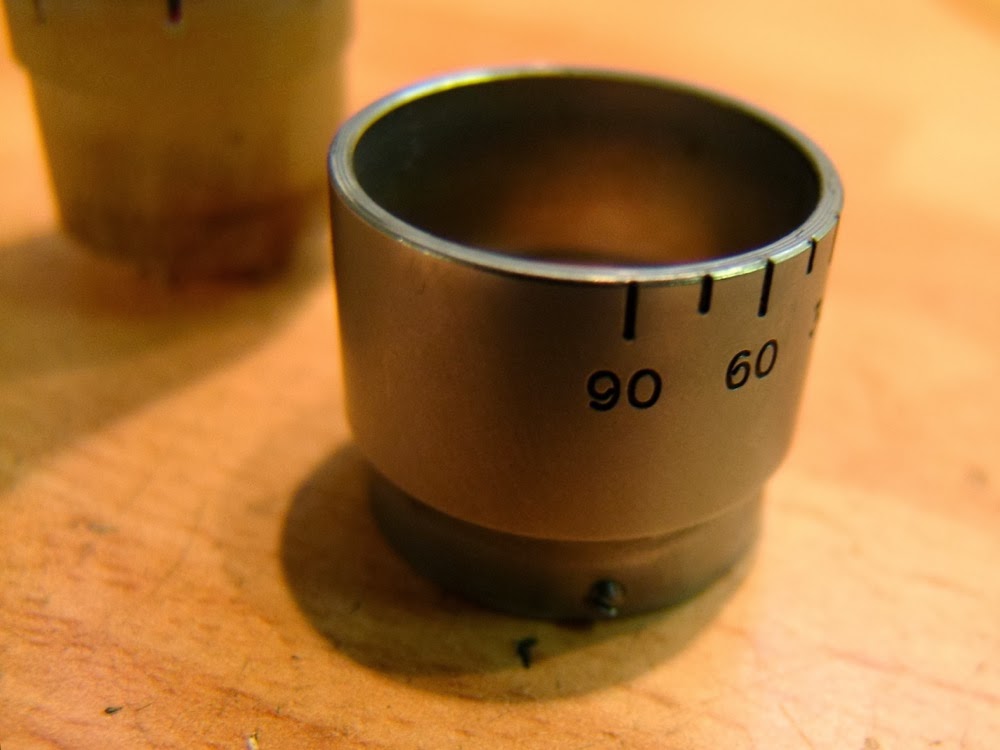 3. Flip the ring over and rub over some fine abrasive paper to remove any dirt and oxidation. 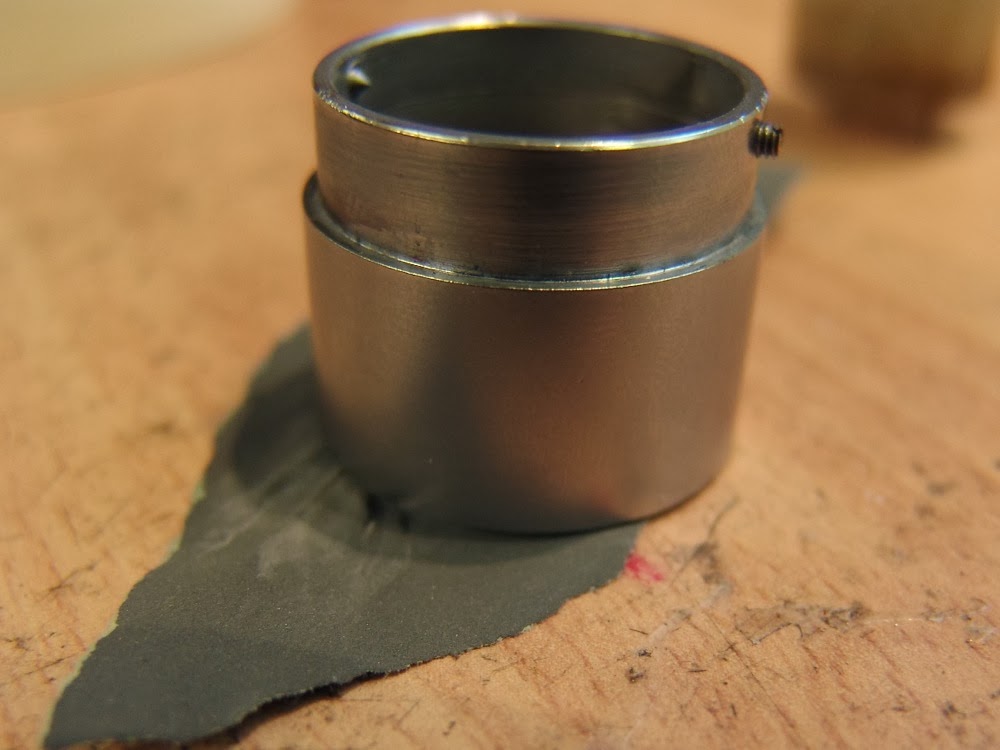 4. Gently run the fine abrasive paper around the bottom of the metal tube that will make contact with the lower ring. 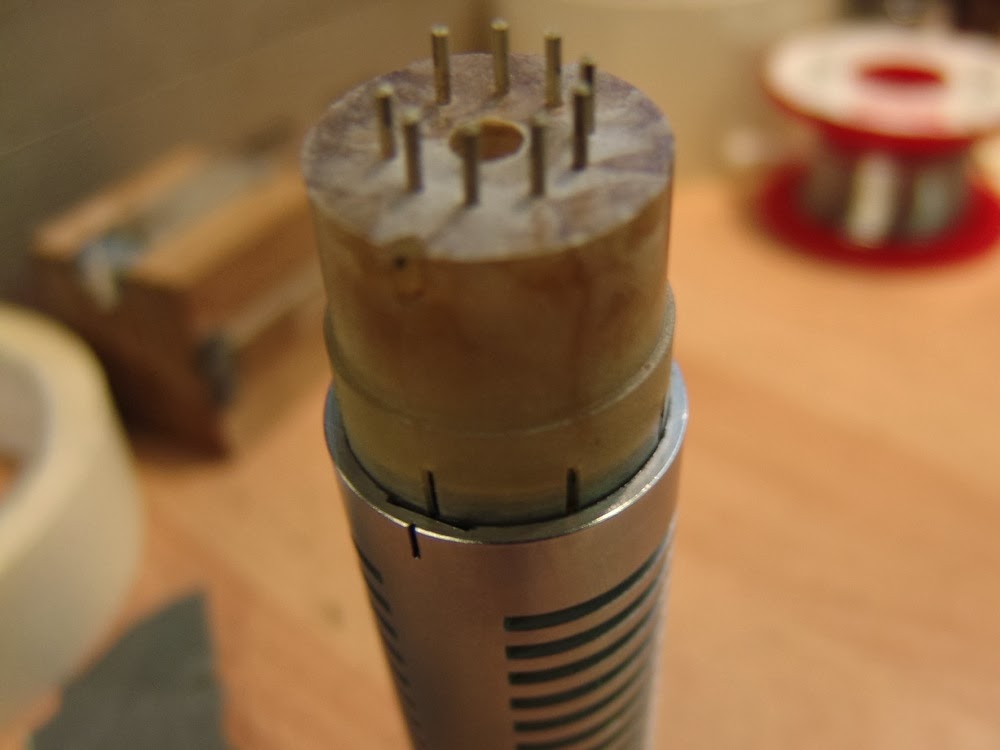 5. Replace the lower ring and tighten the screws, making sure that the metal parts are properly aligned and make good contact. You want a close fit between the tube and ring. 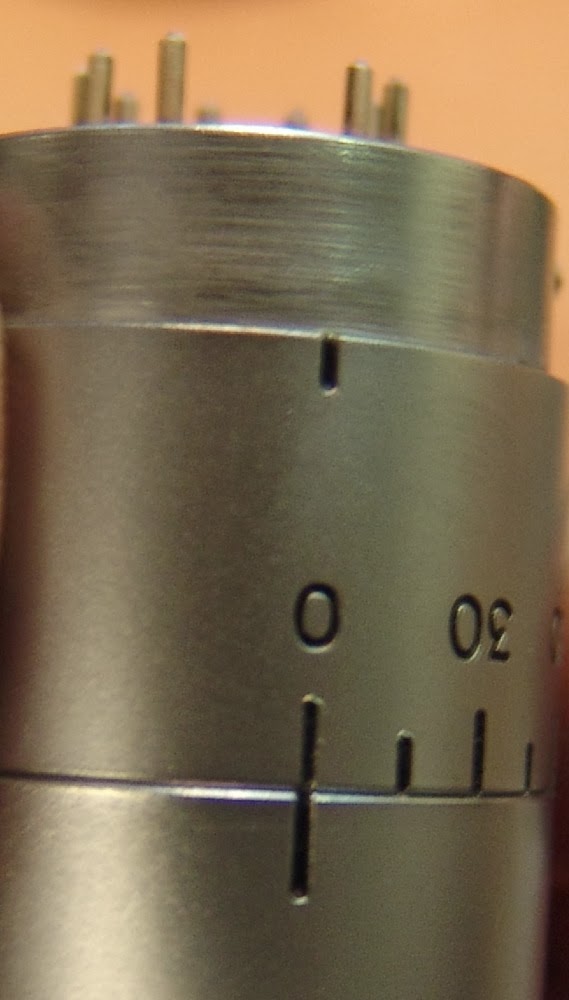 6. If that doesn't work, addition of a strip of copper tape to the plastic collet can improve the electrical contact between the two parts. The tape will eventually wear out if the mic is constantly rotated, but many users tend to keep the same angle for most applications.