There is no 'Mic of the Month' article this month - normal service will resume in July. You can read the archive HERE.

Since the Meteor ME307 coil winder arrived, things have been rather hectic and we've been busy getting it working, and having some fun winding transformers, inductors and pickups. The friction wheel / clutch that drives the lateral action was worn, but we were able to get a good used replacement part from Poland, and everything is working well.

James from Hungry Ghosts came down to the Xaudia workshop for an afternoon, which we spent rolling our own guitar pickups. James wanted a pair of P90s to replace the stacked humbuckers on his 'Vintage' guitar, and I was still playing about with options for my Reverend Slingshot.

P90s are pretty simple things. We made the base plates by drilling and tapping a bar of 5mm square mild steel, and two "Alnico-5" magnets were glued to this, side by side, like this. 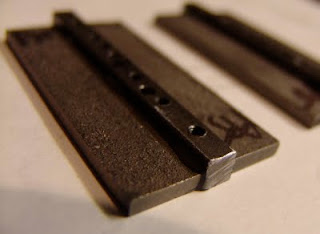 Dipping the magnets in hot wax prevents microphonics, and we rigged up a 'redneck' wax potting system using a £10 slow cooker from Tesco. This works really well and I'll describe it in a separate blog post. That done the pickups could be assembled and wired. 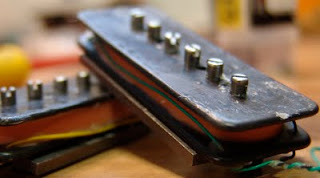 I found some nice deep headed screws which made perfect pole pieces for the pickups. Here is the finished P90... 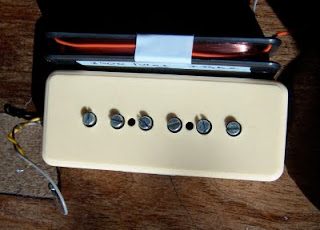 And the new pickups imbued James' guitar with a spooky pink glow!

OK, we made the last bit up but they do sound astonishingly good. 9500 is quite a lot of turns for a P90, but the pickups all had plenty of clarity and no shortage of bottom end either.
0 comments Labels: band, Coil winding, pickup

We needed a better way of wax potting our pickups and transformers. Here's what we did on a budget...


It's a hacked 300 Watt slow cooker, acquired from Tesco for the grand sum of £10, which contains an inner ceramic liner and holds about 3 litres. The probe is simply a cook's thermometer (£14 from Barnitts of York).

It takes a little while to warm up, but sits at about 90 degrees all day, which is just about perfect for potting. The temperature can be further tweaked by running the bath on a variac.
Here's a newly dipped transformer coming out of the soup - a mix of bees wax and parafin wax... 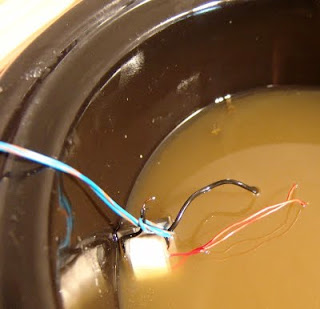 Update: 1 December 2011
The batteries in the cook's thermometer died, and we really wanted to regulate the temperature and avoid the possibility of overheating the wax, so I built a little temperature controller into an old power supply box. The digital controller was 'new old stock' at £30 from ebay, and a 5 amp solid state relay and resistance thermometer came from Farnell to complete the setup. It works very well! 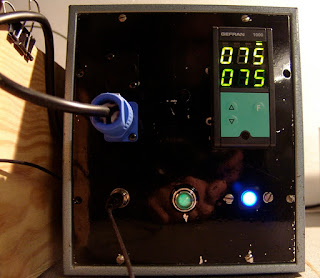 The new ME307 coil winder is up and running, and we're jumping straight in to winding some guitar pickups. The idea was that this should be an easy place to start as they can be made with a single winding, and bobbins, wire etc. are all readily available. There is a big pickup winding community in interweb-land, so help and advice should be available.

The winder in action, with the pickup mounted on a metal plate that we made for the job... 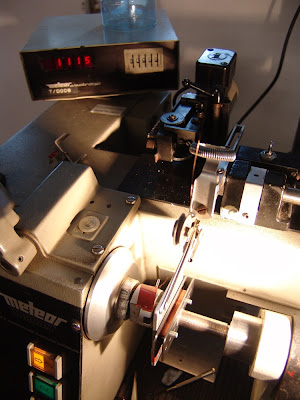 Pickups typically use circa 42 AWG wire (0.0633 mm), which is a very fine gauge and requires care whilst winding and soldering to avoid breakages.

The wire tensioners that came with the winder were a little out of calibration, but with a little practice at setting the correct tension and winding speed, we could easily get 7000 turns onto a P90 bobbin with room to spare. It's probably possible to get 8000 or 9000 turns with practice, to wind a really hot pickup. Here's the first winding from the Meteor.... 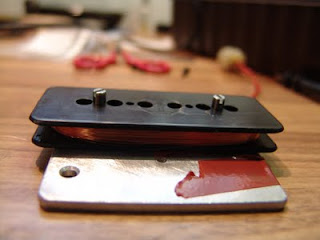 Looks nice! The next step will be to rewind some of the broken microphone transformers that we have accumulated over the past few years. But before that we need to mend the clutch plate, which is slipping.
0 comments Labels: Coil winding, pickup, Workshop

He is asking for help to record single notes from a huge number of pianos, and will combine them into a single virtual instrument made up of all the little piano notes.

What will it sound like? Well, we don't know yet but probably a bit like a piano.

You can email contributions in to his website, so go and grab a microphone, pick your favourite note, and record away. And there's a free party pack for everyone who helps.

Here's how you can get involved.
0 comments Labels: recording

Our New Coil Winder - Meteor ME307

The 'new'* Meteor ME307 coil winder has just arrived at the Xaudia workshop, after a 500 mile round trip to collect it...

We are very excited about this as it will expand our repair abilities and let us rebuild and rewind broken microphone transformers and guitar pickups. It has a counter to set the number of turns, foot actuated motor control, and of course the all important set of tensioners to allow the wire to be spooled at the correct tension.

The coil winder was probably built sometime in the 80's and is built like a tank, with some beautiful Swiss engineering inside. Everything needed a little lubrication and a good clean and, although the machine has clearly seen some years of use, everything is still working perfectly.


We hope to be doing our first windings later this week...
0 comments Labels: Coil winding, Workshop