I have a soft spot for Oktava microphones. They look cool, come from Russia, are fairly priced, and everyone has fun modifying them. That's enough to make the ML52 microphone of the month for June.

Oktava have a long tradition of ribbon microphones dating back (at least) to the ML11 in the 1950s. The ML52 is one of the most recent models, with a slightly odd double-ribbon motor assembly. I had some in to service recently, and noticed something odd....

Here are two ML52s - can you see any differences? 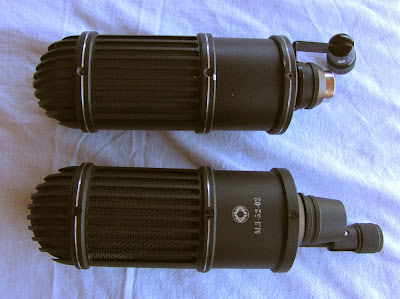 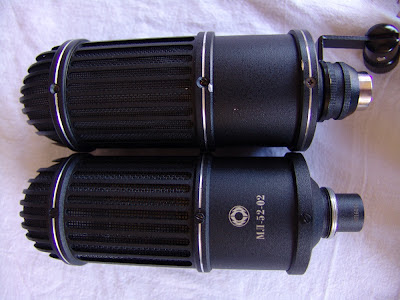 The answer is "Yes". The bottom mic has a logo and serial number, and an XLR that is machined into the bottom bell. It also has slotted screws rather than pozidrive. The grill spacing is also slightly different, but that is harder to see on the photos. 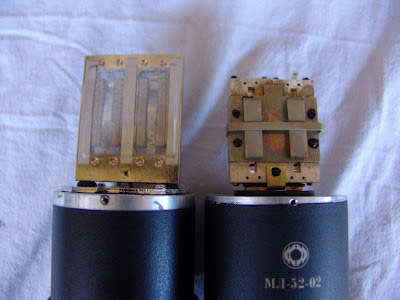 Under the grill, both have twin ribbons, but the motor assemblies are totally different. The one on the left is the same as the one found in Avantone microphones, the right hand one looks typically Russian, with silver contacts and big baffles to protect the ribbons. 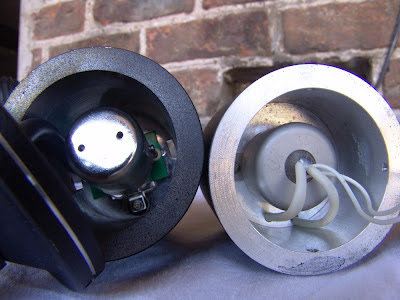 The transformers are also very different. The right hand one is the mic with the logo, and it uses a toroidal transformer. The left hand transformer can looks typical of the China mics, and is connected to a (pointless) circuit board.

Sound-wise, the mics actually sound quite similar, which goes to show just how much the body and grill influence the sound of these mics. The Chinese one has a longer ribbon and stronger (neodynium) magnets, and has slightly stronger output.

I don't want to say the word "fake", but  if forced to jump, the obvious conclusion would be that one mic is from the Oktava factory in Tula, Russia, and the other is made in China - either under license, or perhaps not.  :(

This transformer came out of a faulty Beyerdynamic M260.

The mic was giving no output, but the ribbon was OK. The problem turned out to be a short in the primary winding, which gave an excuse to take a peek inside.

I was surprised how roughly the primary coil is wound - it really looks like it has been done by hand. Perhaps it is to minimise parasitic capacitance, although that is not usually such a big problem with low impedance windings as they only have a few turns.

In this case the short was located and the original transformer was repaired, but that is not always possible, and sometimes a rewind or replacement is required.

Some of the Beyerdynamic  ribbon mics, such as the M500 and some models of M260 have a 'built in' high pass filter. This is done by manipulating the transformer inductance, allowing some of the bass frequencies to pass to ground. Some people like this, but others (including myself) prefer a full frequency response.


Xaudia now produce replacement full-range transformers for repair or upgrade of Beyer and B&O mics. The B-series transformers use a larger core than the originals, but still fit neatly inside the mic. They can be supplied in any desired ratio, and have lower DCR specs than the originals, which gives better noise performance too.
0 comments Labels: Beyer, beyerdynamic, ribbon, transformer

Xaudia have a limited number of Reslo RB microphones for sale, with upgrades and modifications inspired by the BBC. We call these "The Beeb."


Back in the 1950s and 60s, the BBC published a number of R&D reports on ribbon microphones. Here's what they had to say about the humble Reslo RB...

It seemed possible, that a few simple modifications might result in an appreciable improvement in response..."
W. Manson and T. Somerville, BBC R&D Report No. L044, 1961

They recommended a number of modifications, which included....
Xaudia have recreated these mods and added a few more of our own. "The Beeb" has an XLR output, and new 1.8 micrometer ribbon. We also ultrasonically clean these before re-assembly to remove 50 years of gunk. And we put a (removable) sticker on them, so you know that they are 300 ohm mics.


We have a very limited number of these mics for sale. Alternatively we can upgrade your own mic to these specifications. Please get in touch for details.
0 comments Labels: Reslo, Reslosound

Here is my much abused Reverend Slingshot, now complete with a properly mounted stereo pickup. 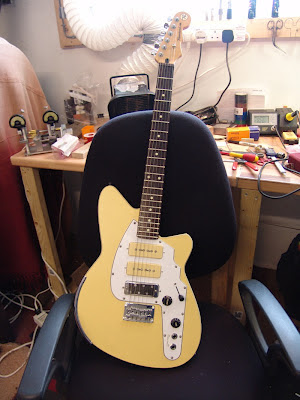 The nice people at Reverend guitars sent me a NOS white scratch plate with routing for 3 P90s, which is perfect for mounting the new pickup alongside the two standard P90s. All I needed to do was drill out a hole for a second output jack.

The open chrome pickup cover was made by modifying a covered one, using a dremel cutting wheel. 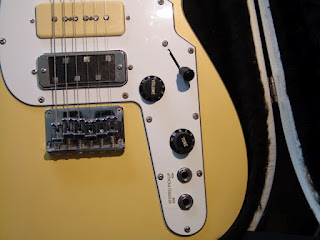 Those who follow this blog may have noticed a certain amount of Reslo-related activity....


Our new Reslo upgrade transformers are the result of this work. They are made here in our workshop in York, UK using high quality German laminations and teflon insulated silver plated lead-out wires.

I have been thinking for some time about a stereo guitar that would spread out the signals from the different strings to a pair of amplifiers, or to stereo inputs for recording. So here is my first attempt at winding a stereo pickup.

In order to get some separation between the strings, I decided to make six mini-pickups and combine them into sets of three. Here are the parts - six bobbins, six steel pole pieces, an Alnico 5 bar magnet, and a home made top board. 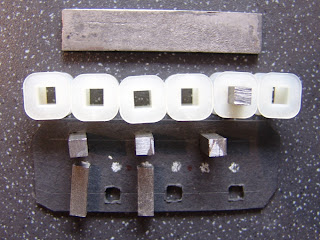 Each was a coil of 5000 turns 42 AWG enamel wire, around a steel bar. Three of the coils were wound normally and three reverse-wound as they will sit on magnets of reverse polarity.


These were then arranged in two sets of three, magnetised by a bare of Alnico 5. The hard part is keeping track of the winding direction, the start and end of the wires, and the magnet polarity - so that everything is in phase! Each set of three coils were wired in series, and the E,D & B strings sent to one output, and A,G & E sent to the other. Once done, the parts were glued in place, soldered, and then dipped in the wax bath.

And then it was mounted in the test guitar - my trusty Reverend Slingshot, with the pickup simply taped in place for a test run. The next job is to mount it properly and put a cover on to hide the mess - the hard bit was finding an undrilled P90 cover, but ebay came to the rescue.


So, how does it sound? Here is a little run on the guitar and the screenshot from protools. The recording was made into the instrument input of an API A2D, using the digital output at 24bit, 96 kHz into protools. Then no further processing, other than bouncing to 44.1 kHz, 16 bit.
[The stereo image of laptop speakers is usually pretty awful, so best checked out on headphones!]

The isolation between the two sets of strings is actually very good - you can hear and see on the screen shot that the two channels are very different, following the two sets of strings. It gives a nice interesting stereo spread with the run on the B-string being panned to the right, and the lower notes played on the A string going left.

Another stereo example is here, along with the separate left and right components.

I imagine this would be good for double tracked guitars with big Pete Townsend style chords - using two amps. Although this is wired for stereo, it could easily be made into a hexaphonic* pickup. I'm not sure what use that would be in the real world, but it would certainly be fun to find out.

Update: Here is the pickup mounted properly in the Reverend guitar

Footnote
*The concept of a hexaphonic pickup is by no means new. The earliest patent reference that I could find to the word 'hexaphonic' is in this application by Gibson filed in 1990. This refers to midi pickups and states "The first category usually makes use of a special pickup which is mounted on a normal guitar as is the case in the present invention It is deemed important to retain the guitarness or feel of the instrument and a retrofittable hexaphonic magnetic pickup is utilized...." So the idea of hexaphonic pickups was well understood by that point, and in fact must have been obvious even to the very first pickup winders.

Digging deeper I found this article on polyphonic pickups, in Premier Guitar magazine, which covers the subject in better detail than I ever could.

And here is a story from the Gretsch website about Chet Atkin's stereo guitar from 1956, which used a split coil to send the three bass strings to one side, and the three treble strings to the other. They applied for patent in 1956, and this was granted in 1960.
0 comments Labels: Coil winding, Guitar, pickup 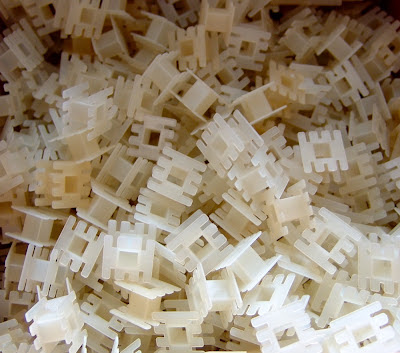