April has been hectic! We have been repairing microphones, installing a new coil winder, and developing some new & exciting products. And suddenly it is already the 30th and just time for a very brief MOTM.

This month's mic is a beautiful and very old French LEM ribbon mic, probably from the 1930s....


Inside, it is very similar to the smaller Amperite ribbon mics, with a large fibreboard frame supporting the ribbon, and a pair of (rather weak) magnets behind.


The mic has a classic design, with brass sides, a folded steel grill and a cast steel yoke. These solid-sided microphones look strange now, but I guess the thinking at the time was that figure-8 microphones didn't pick up sound (or reflections) from the sides, which allowed for a very simple construction. The ribbon itself is positioned right at the front next to the grill, with a metal plate across the magnets at the rear, so there is some attempt at making the mic more directional. 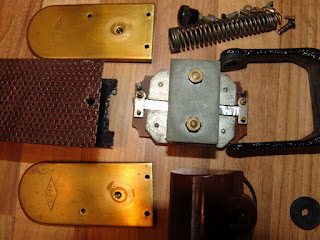 The transformer had failed due to insulation breakdown, but with new magnets, a fresh ribbon and repaired transformer, the mic has a reasonable output and nice vintage tone. And it looks great! 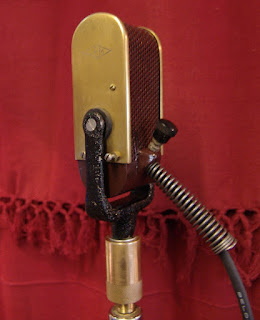 Cadenza ribbon microphones are quite common, but there seem to be more microphones than there are connectors for them. The mics were originally supplied with an integrated stand & connector, which was ideal for desk recording, but not very effective for hanging over a drum kit.

This mic was missing its connector, so here is a chop-job to convert to XLR output.... 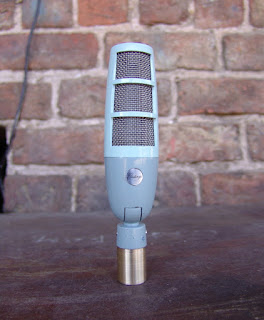 The connector was removed from the mic and the bottom thread cut off and filed flat. Then a piece of brass rod was machined to fit snugly into the base of the mic, and this was bored to accept a standard three pin XLR insert. 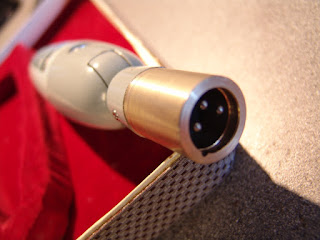 The XLR has the added advantages of making a good earth connection, and also gives a way of mounting the mic on a stand as it can be slipped into a standard mic clip. I think elongating the base  makes the look more elegant too.

Disclaimer
Firstly let me say that this is a study in progress, and should by no means be taken as definitive. Hopefully we will eventually have a big enough data set to be able to speak with confidence, but it will take a while!


Are black label Reslos better, or even different from red ones?

There is a rumour that occasionally appears on the internet concerning the relative merits of Reslosound RB microphones. Some of the mics have red labels, and others have black ones, which has led to speculation that the mics must be different, and one type must sound better than the other.

Normally it is stated that the black badged ones are better. Most rumours have some basis in fact, so let's investigate!


Over the past couple of years I have serviced around 50 Reslo mics, with both colours of badges. Here are some of my empirical observations...

1. The black ones are less common than the red ones, but they are by no means rare. I don't have exact figures but perhaps 75% are red, and 25% black. I will be keeping note from now on!

Edit 29/11/2013: I wanted to correct this figure as I have seen it regurgitated on ebay a couple of times. Having seen a hundred or so more since I wrote this, I really can't say that one is more rare than the other. I would probably guess that they are equally common.

2. There are at least three styles of red badges from different periods.

3. Some later mics (red and black) have a white plastic ribbon holder. The older mics have black bakelite holders. This should not affect the sound.


4. The transformers vary greatly in both looks and specs. This will affect the sound!

So, the only real differences between the red and black label microphones are the transformers (and possibly the state of the ribbons).

Recently, I had seven 30/50 ohm Reslo RB microphones on the bench, and I took the opportunity to examine the transformers. Although the basic construction is the same, the transformers are quite different in looks, and have different inductance values! Some have a striped core with two metals, the middle often being darker or rusty, suggesting a higher iron content.


Impedance and resistance values
This is hardly a statistically significant data set, but here goes...

Where Lp is the inductance at 1KHz, and Rp the DC resistance of the primary winding.

The mics are supposed to be 30 to 50 ohms output, and so from the ratio we can estimate the impedance of the ribbon and transformer itself to be around 0.3 ohms. The ribbon impedance and transformer inductance form a high pass filter, and so we can calculate the frequency, fc, at which the bottom end response drops away.* This handy tool means that we don't have to get out our calculators.

* It must be noted that the inductance of a metal core rises and frequency drops, so the cut-off frequencies will in reality be somewhat lower than these values. However, they should be comparable to one another.

What we can say for now, from our very limited data set, is that the three black label transformers, and two of the red ones, have substantially higher inductances and lower cut-off frequencies than the other two red ones. This difference in bass response is likely to be what some users hear as 'better'. However, it cannot be said that a red label mic always has less bass response than a black one.

The two transformers with purple paint have higher values than the ones with pink paint!

My feeling is that the later Reslos have 'better' transformers than the early mics, and that the colour is more cosmetic than diagnostic. But I shall keep adding to this list as more Reslos come into the workshop, and it will be interesting to see what trends develop.

And finally, if you are reading this and once worked for Reslo (or Grampian), we would love to hear from you.

In 1961 the BBC R&D group studied the Reslosound RB microphone and recommended that the transformer be replaced with one of higher inductance. It seems plausible that the later Reslos were revised to use a different transformer following that study. You can read the BBC report here.

We have just installed a second Meteor ME307 coil winder at Xaudia, for rewinding ribbon mic transformers, pickups and making new parts.

In fact we have were recently given a pair of used machines, and combined the best parts to make one good one. We call this one Marvin, because of his striking resemblance to the robot of that name.

Marvin even has a brain, although perhaps not the size of a planet. It has more sophisticated controller than our existing Meteor winder, which just has manual controls and a foot pedal. The newer model has preset adjustable ramp, speed, idle, and also a reverse wind setting, which is very handy and removes much of the human element from the winding. Let's hope he isn't bad tempered like his namesake !
0 comments Labels: Coil winding, meteor, Workshop 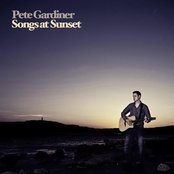 Pete Gardiner is a singer/songwriter and acoustic guitar player based in Newtownards, Northern Ireland and his new album 'Songs at Sunset' was produced by Paul Steen, who used a Reslo mic on the vocals alongside a Shure SM7b.

Paul bought one of our Xaudia upgrade transformers for his Reslo RB ribbon microphone, to give the mic an output of around 250 ohms. Paul fitted the transformer himself and used Ward Beck preamps for the recording. Paul said....

"I recorded with the reslo and an sm7b but the final edit ending up being 99% reslo. The sm7b is heavily compressed and dialled in on occasion for choruses etc."

You can find out more about Pete's album here.

I didn't have space for a Melodium sculpture, but here is something that I do have space for! I was delighted to find a pair of Kolster Brandes KS651 speakers at our local car boot sale this Easter weekend.

They were made sometime around 1970, and have an unusual but very chic cylindrical design, with mahogan-ish veneer and aluminium and gold trim.  The bottom acts a bass chamber, and a horn mounted on the top projects the higher frequencies upwards, giving an omnidirectional behaviour in the horizontal plane. 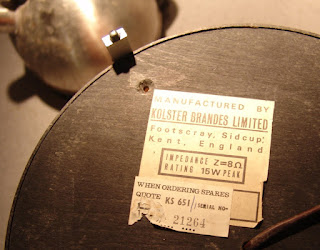 Inside, there is just a single six inch driver, rated at 15 watts, and a lot of foam padding. 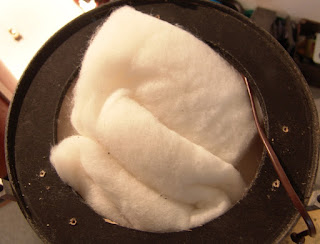 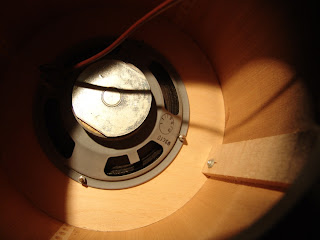 It is always a risk buying used speakers, but they both work perfectly and I am rather charmed by the sound. They rather soften and round the edges of the program material, but maintain a good stereo image. Perfect for relaxing in the evening, and an antidote to a day of precise listening on headphones and studio monitors. Although only rated for 15 watts they are plenty loud enough for home use, and well worth the £40 paid.

Gramophone magazine reviewed these in 1970, and they retailed at £31 when new. They recommend placing them on a shelf, but I really can't agree with that. They seem perfectly suited to sitting on the floor of an elegant room and filling it with music - because of their omnidirectional behaviour they have a wide 'sweet spot', and are very easy to position. 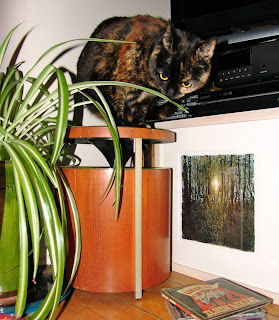 Here is something stylish to have in your living room! A wonderful sculpture made from several Melodium dynamic microphones. 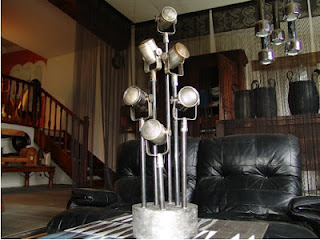 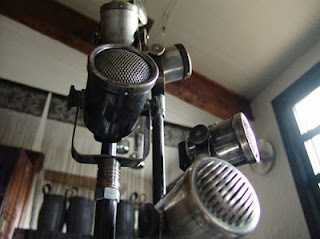 At the time of posting, this was still for sale on French Ebay. I wish I had the space.
0 comments Labels: Melodium