Some photos of hexapups installed in Italia, Reverend and a scratch built guitar! 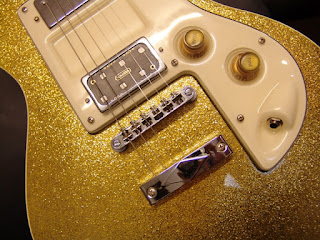 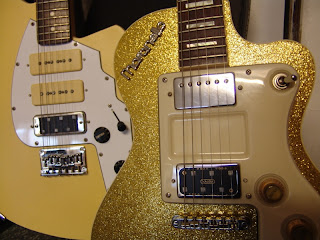 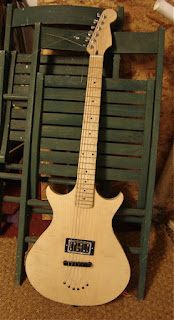 Everyone who has worked with me will know that I am a big fan of the EV RE20 / PL20 microphones.  Although perhaps most famous as a radio presenter's mic, they are used throughout studio-land for kick drum, horns and vocals - Thom Yorke from Radiohead is one famous user.  In our studio, they are the go-to dynamics for pretty much everything that makes a loud-ish sound -  kick drum, toms, bass, guitars, horns, vocals, percussion, organs, science experiments, and so on. We have three, and I could happily use more.


I don't really like severe EQ'ing, particularly with digital EQ, and so the idea of having an RE20 that is voiced for kick is particularly seductive. So, I was very eager to get my hands on the new EV RE320, which is an RE20-shaped thing that is specifically designed for kick drum. But wait! It is also specifically designed for vocals and instruments. How does that work?


Whereas the original RE20 has a switch which operates a high pass filter circuit, the switch on the RE320 gives different voices for different applications, giving access to 'flat' and 'notched' settings.

So, what are the differences between an RE20 and an RE320? The most obvious thing is that the RE320 is very black.... supermassive-black-hole black. in fact. And it comes in a zipped reinforced thing that is a hybrid between a box and a bag. This is a big improvement on the crappy plastic boxes that the RE20 came with, which tend to snap at the first opportunity. The RE320 is also about £150 cheaper than the RE20, and is 'assembled in China', whereas the RE20 is 'made in the USA'. 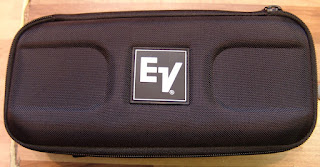 More importantly, what about the sound? Here is a frequency plot of a 'normal' RE20, recorded in the Xaudia test chamber at 20 cm from the source. The blue line is the flat setting, and the green is with the HPF switched in.


The RE320 has a higher output in both positions, and also has a peak around 4 to 6 kHz, which may brighten up some vocals. And there is other stuff going on too! A more revealing way to look at the behaviour of the 'kick' position is as a difference plot...

Despite the differences, the RE320 does sound like it belongs to the same family - in fact it sounds rather similar to an RE20 with a +5dB boost around 4-5 KHz. I guess that makes sense!

Only time will tell if I will love this as much as the RE20, but it is a decent dynamic mic and will certainly find uses. I will report back once I have used these on a real recording session.

A typical day at the office

I think I always wanted my bench to look like the inside of the Tardis. Signal generators, oscilloscope, LCM meter, frequency counters, distortion meter, microohm meter, home built impedance bridge, and lots of other gadgets. And an RCA 77DX, of course!
0 comments Labels: Test equipment, Workshop

Here's a rather deformed grill from a Beyer ribbon mic... 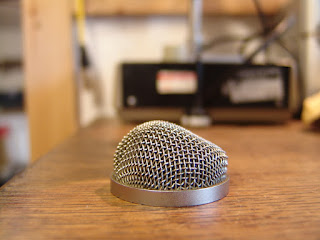 And here's how we straighten it using a doming block.... 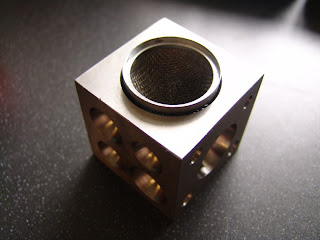 Simply pick the nearest radius curve from the block, and push out the dents with a suitable doming ball.... 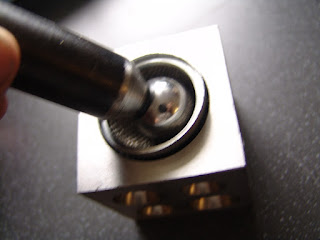 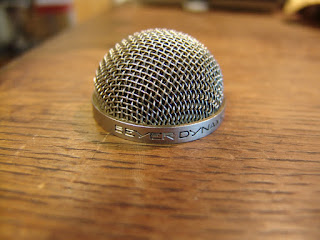 I have come across a couple of Cadenza ribbon microphones recently that are not what they seem. 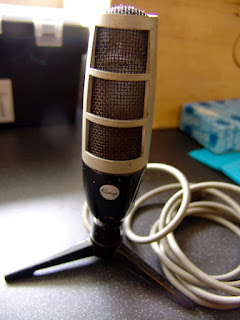 The microphones came from different sources, but both had been modified in the same way. The mods were performed long enough ago that the foam had started to disintegrate.

In both cases the ribbon element has been replaced by a dynamic element. and the mic stuffed with pink foam. Both mics are painted black with a silver top, and in both cases the stand adapter is fixed to the microphone rather than being removable.


There are clearly a few of these floating around. The stand modification looks well done, and I suppose it is just about possible that this was done at the factory, perhaps as a budget alternative to the ribbon mics, although I have not seen any documents to support that.

So, look out when buying old microphones - what you see is not always what you get.
Caveat Emptor!
2 comments Labels: Cadenza