Winter is here! And so are Modern Day Chicane. 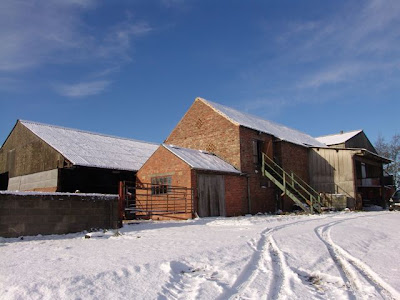 This was the scene at Xaudia studio yesterday - a beautiful cold, crisp and bright day in North Yorkshire, and it's times like this you really appreciate the peace & tranquility we get here. Ideal for creativity and recording. And this was the view from the studio over the surrounding fields. 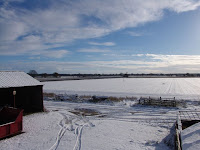 We're a little isolated, not quite in the middle of nowhere, but certainly just down the road from the middle. They don't grit the road here, and sometimes the pipes freeze, but yesterday everything was perfect. 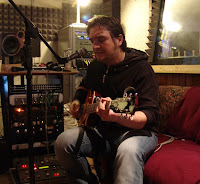 Modern Day Chicane were here to record some drum tracks for a future EP, in what turned out to be a productive, if somewhat frantic session. I arrived early to mic up the kit as drummer Pete was coming up from London on the train, which of course arrived a little late due to the weather, which left us about 4 hours to get the drum takes. We tracked at a blistering pace, cutting six live versions that may (or may not) see the light of day as bonus tracks, then we did five of the songs again to a click track, with Ryan and Nicola (pictured) in the control room providing guide vocals, guitar and bass. 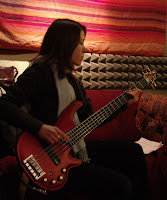 Once we had a couple of decent takes of each drum track, we abandoned the editing and packed up early because it was getting cold and dark, and the talent had to get to a gig. It had already dropped to -4︒C by the time we had to scrape the ice from the cars. Brrr!

October was a bad month for blogging - I was busy with the haunted house sound installation, and this was compounded by a fault with my Macbook, which took the Apple repair centre three weeks to find and fix, a long time to track down a faulty cable. With a microphone, that would be the first thing to check! Amongst all the chaos I completely forgot to do the 'mic of the month' column. 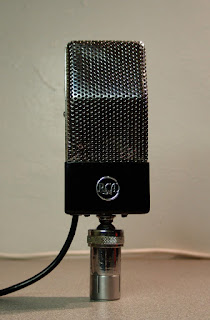 Back in the real world, I have chosen the RCA Junior ribbon for November's Mic of the Month. This is because they seem popular at the moment, and we've seen four at the workshop for service or repair. The fun thing about this family of microphones is that they vary somewhat in construction, so it is possible to compare and contrast versions from different eras. They tend to be a bit more affordable than the bigger RCA 44 and 77 mics, but still have a good tone that is very usable in a modern studio, especially if the ribbon is in good condition and the transformer is healthy and wired correctly. 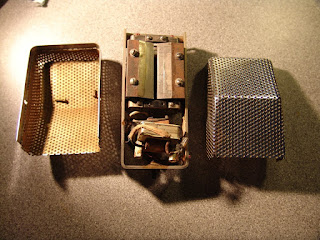 The 'Junior' was created as a budget version of the RCA44, with a similar motor assembly but smaller magnets and housing. The most commonly seen models are the 'black badge' and 'red badge' versions, and these are actually quite different inside - the black badge model has a 3.0 mm x 55 mm ribbon, whilst the red badge version I examined has a wider, 4.5 mm ribbon and a stronger magnetic field. 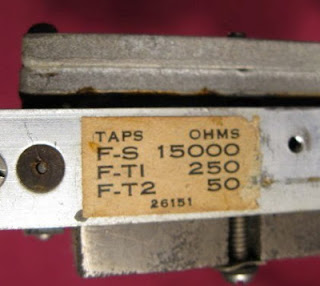 The output transformers on these microphones can be set for 50 Ohm, 250 Ohm or 10KOhm output impedance, and it is worth checking that the mic is wired correctly to get the best performance with modern studio equipment. Normally that will be the 250 ohm setting.


The earliest and rarest version, the MI-4010-A, is shown on the right in the picture below. It is slightly larger than the later versions, with a different ribbon assembly which has horseshoe style magnets around the back of the ribbon. The magnetic field in this example is weaker, and the output lower than the more modern versions, although the tone with a new 1.8 micrometer ribbon is very pleasing. 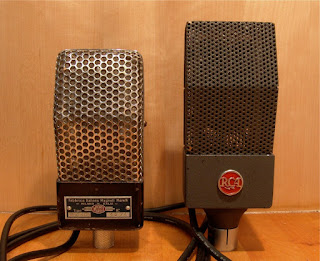 Finally, some RCA mics were actually made in Europe, and it would seem that some appear under different names. The microphone on the left is badged as 'Magneti Marelli, Milano, Italy' but is almost identical to the black badge RCA 74b. The only difference is that the Magneti has an alternative transformer, but still with high and low impedance options. The sound is every bit as good. 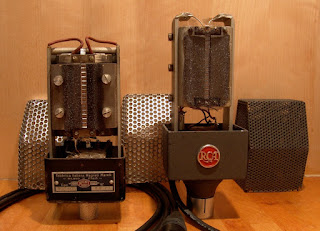 We'd love to hear from anyone who knows more about the Magneti Marelli microphones and their relationship with RCA.

(Thanks to Jules at DADA Studios in Belgium and Jørn Christensen at Rodeløkka Studio in Norway.)
0 comments Labels: mic of the month, RCA, ribbon, vintage 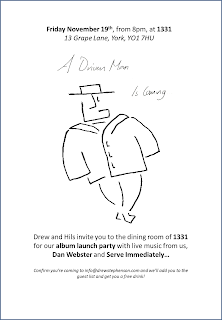 Almost two years ago, singer-songwriter Drew Stephenson and Cellist Hilary Jones started recording an album in our studio. Anyway, after what seems like a very long time, Drew's album "A Driven Man is Coming" will be released on November 19th at a free launch gig in York. The gig will be at 1331, on Grape Lane. More details can be found at Drew's website.

Do come and join us if you can.
0 comments Labels: band

Sounds from the halloween maze

The big 'Hallowscream' event at York Maze is now over for the year, and the guys and girls are now hurridly getting ready for Guy Fawkes night. It's a quick turn around so good luck!

Several people asked to hear the sounds that we 'created' for the two Halloween haunted houses. I took most of the sounds from the Freesound Project, which is a very handy searchable library of sounds, most of which are available through the Creative Commons license scheme. Other sounds used were my own creations.
The creepy clown theme for the 'CarnEvil' haunted house was based on a loop from The Midnight Syndicate, who specialise in music for haunted house and similar attractions. Some of their tracks were also used for background music in the theatre area.
I'll leave these tracks up for a week or so, so grab them quickly. Enjoy!
Carnevil Haunted House
Main Clown Theme
Upside down room music

Toilet Lobby
(A mash-up of Beethoven, Mozart, and some C&W in the background!)