Here is a nice Frankenphone ribbon mic that I put together from spare parts .... 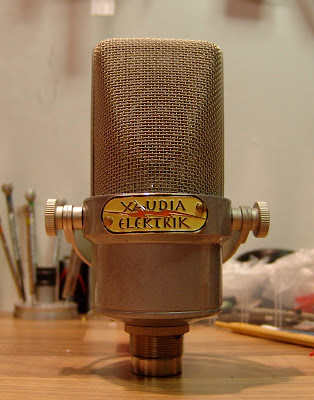 The mic body was salvaged from a broken SE condenser mic, repainted with some nice hammer finish paint and given one of our shiny brass nameplates.

The ribbon motor frame was an unidentified part that was found in an old Reslo mic, but fitted with new neodynium magnets to give a good strong magnetic field. And the transformer was, of course, wound here at Xaudia.

The microphone is rather nice sounding, with a full bottom, big proximity effect and a and good top end response too, for a ribbon. We'll be putting it through its paces with Silent Fears at the weekend, along with some other new toys.

This rather lovely RCA44 style ribbon is our microphone of the month for March. He was found on Australian ebay, and so will be known as 'The Australian' until his true identity is discovered!

The mic has a chrome plated steel bottom, a steel yoke, and brass grills, painted black. Connection to the rear is via a pair of screw terminals for balanced output, but with no ground connection. 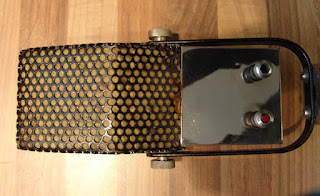 Although the body shape is very similar to an RCA44, the interior is more like the early Harry Olson prototypes, with a single large horseshoe magnet and broad flat pole pieces, giving a magnetic field strength across the poles of around 1000 Gauss.

The transformer is a dual bobbin type, with a primary inductance of 255 µH at 1 KHz, and 770 µH at 100 Hz. The thick primary wire gives a measured DC resistance of 27 mΩ, and the overall turns ratio is 1:50. With a 2.4 micrometer ribbon, the Australian has an output impedance of about 600 ohms.

There is no maker's name plate, and no sign that there ever was once. However, next to the ribbon there is some writing in pencil. This is a little tricky to capture on film, but it reads "RIBBON 23825 B1154". 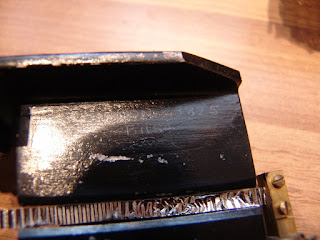 Could this be a clue? Perhaps the 23/8/25 is a date from a previous ribbon installation? Sadly, I don't think so. 1925 seems a bit too early - although ribbon mics were invented in the 1920s, the RCA PB31 (first commercial ribbon and forerunner to the RCA44A) wasn't introduced until 1931. It seems more likely that this is a copy or prototype made by a small engineering firm, based around patent drawings.

Sound-wise, the mic has a rich warm tone with a decent output for its age, and the 600 ohm output makes it very usable with modern equipment. The lack of an earth connection makes hum an issue, and I am contemplating adding a third terminal to the rear, if I can find one that matches.

Perhaps it was made by an Australian manufacturer? AWA made copies of RCA microphones, and Zephyr were another Australian company that made some nice ribbon mics. For now it is a bit of a mystery, but we would love to hear from you if you know more about this. 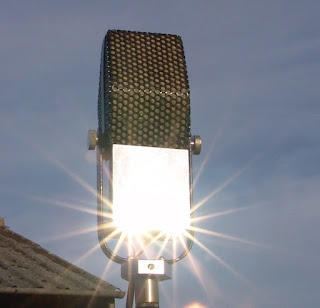 Here is video that was sent to me Göran Petersson, of an acoustic recording of a song by the very talented Lena Swanberg.

Last year we re-ribboned Göran's Reslosound RBL ribbon microphones, and upgraded the transformers.  One of those Reslos is used here on the acoustic guitar, combined with a Neumann KM184. It just sneaks into shot towards the end of the video.

You can get more information about Lena and her album launch at her website.
0 comments Labels: Customers, In Action, Reslo