We have seen an influx of weird and wonderful ribbon microphones this month, including a rash of Bang and Olufsens, half a dozen Film Industries mics, and a cardioid Toshiba BK5 copy, so we were spoilt for choice for a Microphone of the Month.... until this came along...


The Telefunken M201/1 was one of the very first commercial ribbon microphones. It was made by around the early 1930s and would most likely have been used for radio broadcast. These ribbon mics were a big improvement on the carbon microphones that they replaced, but in Germany they were quickly superseded by the new valve condenser microphone technology.


There are very few of these left in circulation - this one is in very nice condition and after a clean and a new ribbon sounds truly excellent, with a strong output not much below a modern dynamic.* After over 80 years, the magnets are still strong with a field on >5000 Gauss in the narrow 2.5 mm gap between the ribbons.


The M201/1 is constructed around a huge horseshoe magnet, which surrounds the transformer and (presumably) some kind of acoustic labyrinth or wadding to control the pattern. This dictates the shape of the body and gives it an unusual cylindrical aspect. The ribbon sits behind a fine brass grill at the front of the mic. With the rear of the ribbon being obstructed by the magnet, the mic is almost cardioid in nature,  becoming more figure of 8 towards the very bottom of the frequency range. Two chrome B-shaped vents sit above and below the ribbon to equalise the pressure behind the ribbon. The output connection is made via a pair of screw terminals hidden behind a circular plate on the rear of the mic. 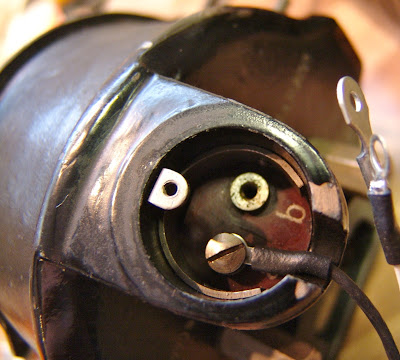 Although we can't see the transformer, we can make some measurements. The primary and secondary DC resistances are  50 milliohms and 19 ohms respectively, and the inductances are 5.25mH and 2.43H  at 100 Hz, which gives a turns ratio of (about) 1:22. The low DC resistance and relatively high inductance point to a well designed transformer with a good quality core and thick wire for the primary. Excessive resistance in the primary winding leads to noise, so it is especially important to see a low value here.


The ribbon itself is long and thin, and the old broken one inside the mic was fully corrugated (the one shown is a replacement). For 'ease of service' the ribbon is held in a frame behind the front grill. However, once in place the assembly hides the ribbon pole pieces from sight, which means that alignment is a case of trial and error, which is possibly the only weak part of the design that I have found. With the new ribbon, the mic has an output impedance of around 300 ohms.


I did a test sweep of the mic in our little testing chamber.** The mic shows a strong output with good bass response, a little proximity effect below 100Hz, and a graceful roll-off above 6KHz. The noise above 14KHz are likely to be diffraction from the grill and other parts.

This microphone is thought to have been made originally by Siemens & Halske and supplied under various model numbers including the KVM3, SM3 and others, and this rather wonderful example on Martin Mitchell's excellent microphone blog, which is just called model 'R'. In German a ribbon mic is called a Bändchen-mikrofon. However, the name plate on this is in English, and perhaps this is the export model, with the R simply for Ribbon. There is a bit more history at Martin's blog, which is well worth a read.

* Testing against a Shure Beta57, the preamps were on the same gain setting for a comparable output
**Calibration is with an omni measurement mic, so there can be some bumps due to the differences in pattern picking up more or less reflections from the room.
3 comments Labels: Siemens, Telefunken 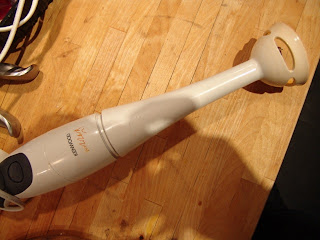 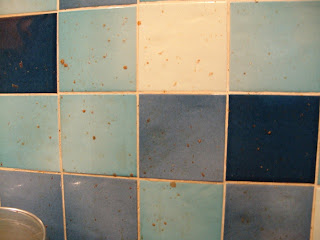 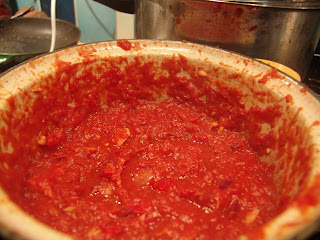 Update June 2013
I put this in the bin and bought a new Braun instead. Happy now!
0 comments Labels: Cooking, Kenwood, rant 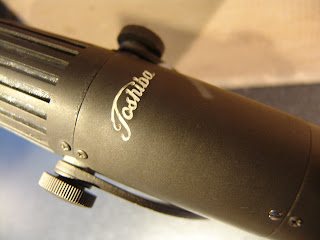 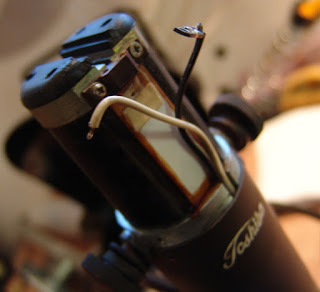 As well as microphones, Grampian made amplifiers and other PA equipment. Here's an old Grampian amplifier and speaker set. 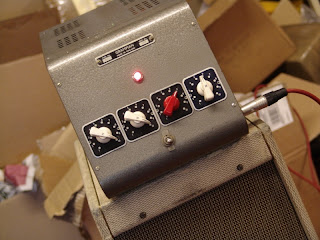 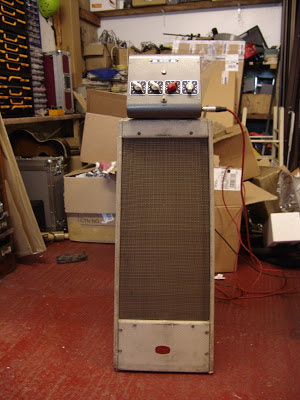 I found the amp a few years ago in Dave Dee's junk shop in York. The circuit is actually very similar to a Mullard Twenty, with the addition of a transformer balanced mic input, and several taps on the output transformer for 8 ohm loudspeaker or 100V connection. I have even used this in the past as a mic preamp for recording, for some warm and slightly dirty vocal tracks. 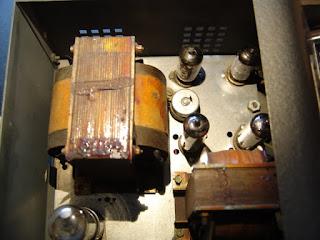 The speaker is a recent purchase found on GroupDIY.com. It has a rather nice and unusual tapered shape, with (no longer very) white vinyl covering. The whole set has a really cool vintage look to it - very different from today's ubiquitous square black boxes. 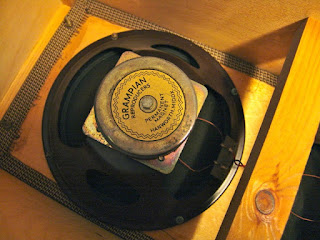 I am now using this as a guitar rig - it has a great vintage valve tone with just the right amount of breakup coming from the speakers. There is plenty of volume for recording, but I would hesitate to use it for rehearsals with a modern loud drum kit! 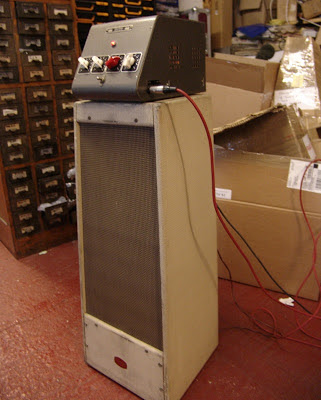 I am unsure of the age of these but I would guess 1950s or early 60s - they don't appear in Grampian's 1968 product line, and presumably pre-date that. If anybody knows more, please get in touch.
2 comments Labels: Grampian, preamp, speaker

Here's an easy way to switch between the 'split' and 'spread' modes on our hexaphonic pickups, using a DPDT switch. 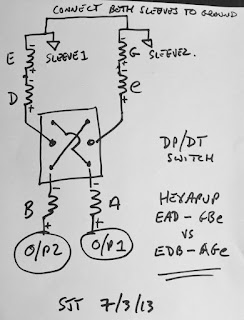 The E&D strings are wired in series, as are the G&e strings, observing polarity. The negative sides of these pairs are wired to the sleeve(s), and the positive ends of these are connected to a double pole, double throw switch as shown.

The B and A strings are wired between the switch and the two outputs.  Flicking the switch then routes the E and D to either the B or the A string, and so on.

This is ideal for a tip-ring-sleeve stereo output jack. If using two mono jacks then the sleeves of these should be connected together, and to ground.
0 comments Labels: Hexapup, stereo pickup 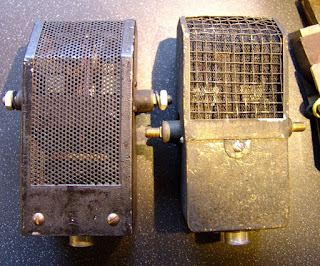 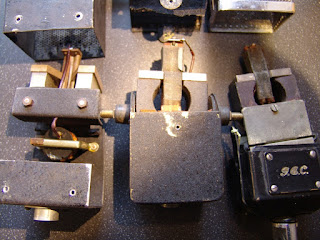 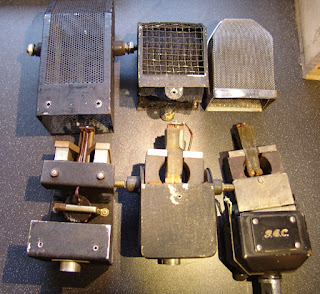 As an aside, the GEC patent is slightly odd, in that the major innovation is that the pole pieces are held in place by the magnetic field alone, with no mechanical fasteners. That is to say the major innovation is something that they have left out, rather than something they have added to the system. The implication being that other manufacturers MUST use a screw, bolt or other fastener, or else risk infringing the patent.  It would have been interesting to see how that one would stand up in court!
0 comments Labels: BBC, GEC, Marconi, patents, ribbon, unidentified

Grampian made some fine ribbon microphones, and the GR1 and GR2 were our Microphones of the Month in May of last year. Here's a scan of the original Grampian GR1/2 manual.

The mic also came with a word of caution....

I am particularly pleased to see the warning not to use a DC meter on these. Quite often I come across ebay auctions where the seller measures ribbon mics with a multimeter, unaware that the carrier current can bump the ribbon out of the magnetic field and stretch it. :(

Grampian also made matching transformers for their mics - we have a few available for sale. Here is the factory drawing for the transformer.

I posted some other Grampian documents last November.

Many thanks to Pete Guppy for sending this in.
0 comments Labels: Grampian, manual