It is quite sad to think that the success of the big American guitar manufacturers (F--, G--, you know who you are!) led not only to some excellent instruments and high standards of construction, but also to the demise of several smaller builders of quality guitars. Cheap imports from the East added to the problem. One such victim was the German manufacturer Framus, who went bankrupt and ceased production at the end of the '70s. (The company has since been reborn).

Framus made guitars of generally high quality with some interesting features. Here is a 1968 Framus Television semi-acoustic, the shape of which is clearly influenced by Fender's Jaguar/Jazzmaster (or was it the other way round?) . It has a pleasing asymmetry, with a single f-hole (as far as we can tell, most Televisions had two), three pickups, and a tremolo. The headstock shape is whacky - like a big hand - but we like it. Colour of this one is a beautiful stained carrot-orange-yellow, rather like certain Gretschs - we think they call this 'aniline yellow'. It has a laminate top and back.


This guitar arrived on the bench with toggle switches in place of the original sliders, as well as a couple of loose wires, which we of course replaced/fixed. The circuit is slightly unusual (which is why it is on this website at all!), so we've sketched a circuit diagram to help other owners. 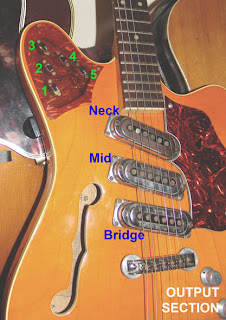 The circuit consists of two parallel output stages each with volume and tone pots (marked T&V in the diagram) , which the player may use to switch between 'rhythm' and 'lead' settings. This approach predates the days when everyone has booster pedals on the floor, and similar systems are also found on Jaguars and Jazzmasters. In the 'rhythm' position, only the neck pickup is active. In the 'lead' position any combination of the three pickups may be switched on - the pickups in combination give some audible phase cancellation. There is also a bass cut filter switch. A summary of the switches:

As the tone and volume pots are tricky to remove and function well, they were not investigated or measured for value. I think they are just standard.
There's a good chance that the circuit is similar to Strato Delux models of similar vintage, which also have up to 5 switches. Do let us know if you can confirm or deny this.
Labels: Framus, Guitar