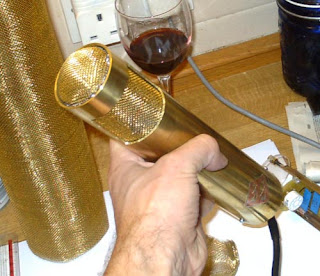 Jakob Erland’s Gyraf G7 DIY tube mic project has proved one of the most popular microphone projects. Several years ago I built a pair of these from scratch, and have since built several variations using different tubes, transformers etc. Below are a few notes on the project. 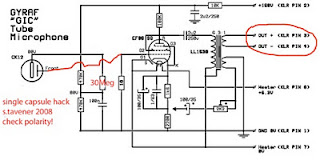 When using a single sided capsule, the circuit can be simplified somewhat and several parts omitted. The the capsule may be wired straight to the tube grid, avoiding use of a coupling cap. Note that this affects the polarity of the mic, so reverse the output wires and be sure to check against an SM57 or similar know microphone! In this arrangement, the backplate polarisation resistor can be lower than 1 gig. 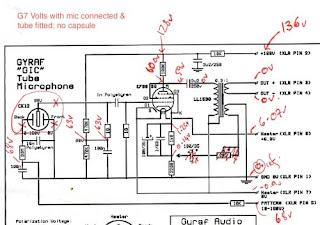 I built a version of the microphone by etching Gyraf's layout. Wired it up and checked some voltages - and found that the supply is rather low under load. I got about 176 Volts without the mic connected, and was down to 136 V with the mic in the loop. Heater supply dropped from 6.3V (set whilst unloaded) to 6.08V. Here are some voltages for reference.

Note in the diagram above that one side of the capsule has a slightly higher voltage than the other - no problem in omni or cardioid but noticeable in figure8 mode when recording Blumlein pairs. Here's a quick fix! 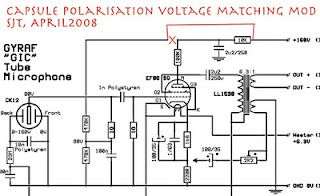