We've had some website issues this weekend, but everything has been sorted out, so let's get back on track with another vintage microphone curiosity. 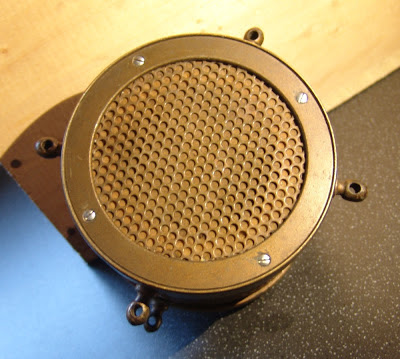 This gigantic bronze dynamic mic has no badge or makers name on it, but arrived in a box of GEC microphones. Connection to the outside world is made via two terminal posts at the rear. From the size and style it probably dates to the 1930s or even earlier. 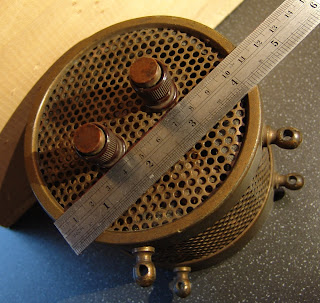 It is around 11.5 cm across and 8.5 cm deep, weighs nearly 2 kg, and would originally have been mounted on springs within a hoop. Two of the suspension mounts are missing - it will be a quick job on the lathe to turn new ones from a bit of brass. 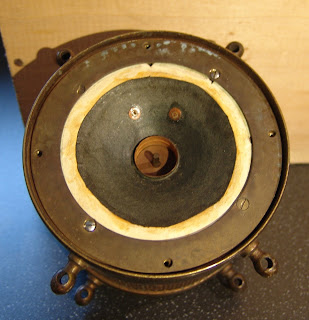 Inside the mic is very much like a speaker in reverse, with a paper and fabric cone driving a coil into the field of an enormous magnet. 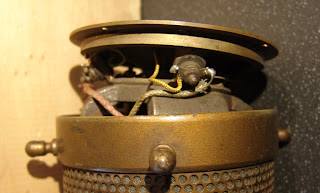 On initial testing, the mic wasn't picking up well as the cylinder in the centre of the diaphragm was scraping against something as it moved. Some careful cleaning to remove the dirt eased the movement, and the mic sounds OK, if rather peaky. The addition of some foam inside the body helped to dampen some of the ringing from the cavity. 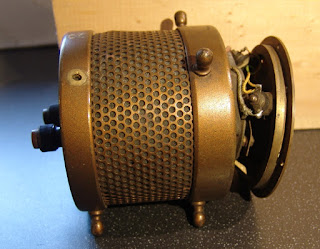 Even with the foam, the mic is far from flat in response with an enormous bump at 200Hz. So if you want to give something an EQ boost at 200Hz, this is your mic!

If you recognise this one or have information on any of our other unidentified mics, please get in touch.
Labels: dynamic, GEC, unidentified