Last month I posted about a pair of Ward Beck Systems preamps that I had stripped down ready for racking. Finally the chassis arrived from Canford Audio, so off we go again...

The old aluminium front plates from the preamp modules were screwed to the new front panel to act as a drill guide, so getting the holes in the right places was quite easy (for once). The Canford chassis is very nice to work with - the aluminium panels machine easily, and the metal is thick and sturdy enough for the job.

With additional holes drilled for XLR inputs and a power switch, the panel is ready for the modules to be screwed in place.

It looks like a neat job once the black printed control panels and all the knobs are back in place - I also added a pair of jack sockets as additional outputs so that I can route the signal to either the front of the unit or the studio patchbay - or both for some parallel compression fun!

The modules are connected to the outside world via 44 pin card connectors at the rear. Although these look daunting, only a few of the connections are needed for our application. Here's a revised pin assignment with the surplus connections omitted. 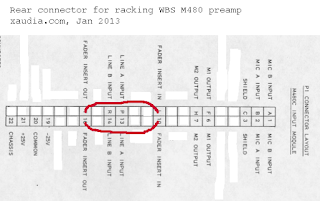 In this case I am just using two of the four available inputs - XLRs on the front connect to Mic Input A, and jacks on the rear for line input A. Both sets of outputs (M1 and M2) will be used, one on the front and one on the rear of the case. On the original WBS mixer the modules would have been wired to a fader, but we can bypass this by connecting across the appropriate pins as shown in red. Note that in the schematic for the M480C, the fader inserts are wired from pin T to 10 and from pin 16 to L, which means diagonally across the connector rows. 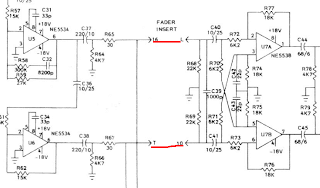 However, when we wire it that way the polarity of the preamp is inverted, as shown on the scope. 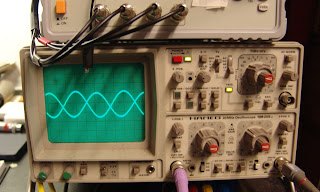 It seems likely that some other part of the console flips the phase, or less probably that the M480 is differently wired from the M480C - one would expect the modules to be interchangable. Either way, the simple answer is to connect pin T to L and pin 16 to 10, as shown on the pin assignment above. 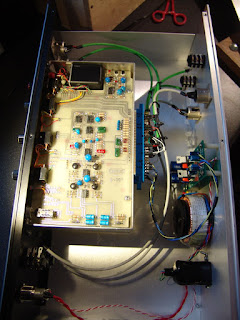 The hole for the fused IEC power inlet was cut through with an appropriate punch - this gives a neater rectangle than a jigsaw or just drilling and filing, and is quicker too. A dual ±24V bipolar supply is required, and I used a small board left over from an 1176 project. The board from mnats.net uses LM317 and LM337 voltage regulators, and 5Kohm trimmers were used to set the voltages. The modules have on-board filters and regulators to bring the down to ±18V, and their is no audible hum on these modules even at full gain.

Once up and running, the modules sound very nice with plenty of gain. I particularly like the low boost on the EQ, which sounds like it should be useful for beefing up tracks. At the moment many of the pots are rather worn and scratchy, so I next will strip it all down and replace those. It never stops!
Labels: preamp, Ward Beck, WBS