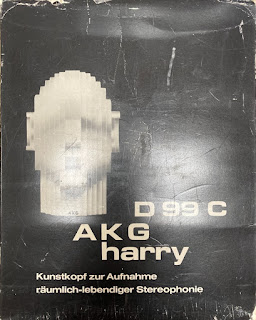 Here is the German language manual for the AKG D99c, also known as Harry.

An English translation courtesy of Google...

The Physics Institute of the University of Budapest conducted experimental tests. Many years of well-founded knowledge of the physical and physiological relationships of human hearing and the experience as a specialist company for electroacoustics have enabled us to make a noteworthy contribution to the artificial head stereo microphone, which has become current again, with the series production of a recording head within a short time.

The interest of a large circle of committed tape fans and serious amateurs in an inexpensive one, which has recently been aroused by many press reports and extremely positively rated AKG demonstrations among trade visitors. We can now match the artificial head for stereo recordings with the AKG D99c stereo recording head, which is available now.

The material structure of the head and shape of the ear cups, in conjunction with a simplified but acoustically effective simulation of the ear canals in connection with the two special dynamic transducer systems integrated in the head, are tailored to an optimal recording [which is] analogous to human hearing.

When listening through high-quality headphones - regardless of whether closed or open earphones are used - the listener experiences an intensive acoustic sense of space that cannot be achieved when recording with two individual microphones.

The artificial head as a physical structure itself is above all a prerequisite for the natural occurrence of the factors that determine the spatial impression, such as the difference in intensity, the difference in transit time and the frequency-dependent shadowing effect from one ear to the other.

The AKG D99c stereo recording head, with its optimally designed frequency response (it must be viewed with different criteria than usual microphones), always ensures consistent objective recording properties and can be used as a "double", so to speak, where you need to keep your own head free for directing.

The stereo artificial head recording is particularly interesting where moving sound events are involved. For example, playing, singing children, lively design of radio plays or reports; also outdoors, for example with passing cars, noises in the background and much more.

A further aspect: when recording conferences, it is easily possible for the listening recording clerk to concentrate on a specific speaker and to record his words due to the acoustic-spatial localisation. The spatially lively playback effect of the AKG stereo recording head D99c can be achieved with any AKG stereo headphones of your choice, regardless of whether the recording comes to the listener live via an amplifier or, as a tape recording, is listened to afterwards.