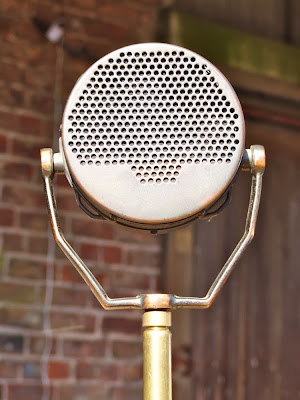 Our microphone of the month for September is this a rare and lovely BBC-Marconi 'type B' ribbon microphone. The type B is closely related to the 'A' series of mics (AX, AXB and AXBT) which were made from around 1935 onwards. The model B was made from 1937 onwards and used the same  motor assembly, but with a smaller (yet still massive) magnet and without the ribbon tension adjustment facility.


The smaller magnet format allowed the mic to be packaged into a smaller cylindrical body, and these were apparently were often used for outside broadcast, attached to the chest of the broadcaster! One would have to be pretty strong to carry that around all day.

Although this is widely know as the model 'B', the nameplate calls it 8559A.

As well as the outer grill, there are two extra windshields inside the mic, which would have protected the ribbon from wind blasts and dirt. These windshields did their job well - in this example, the ribbon is unbroken, but this has oxidised and stiffened over the years and will need to be replaced.


The magnet and motor assembly are held in place with foam rubber, which has mostly survived the years. The output transformer is hidden behind the magnet. This had a break in the secondary winding, but luckily I was able to unwind it by a single turn and bring the mic back to life.


At the rear of the mic, connection to the outside world is made by three screw terminals, and square bulge at the bottom shows the location of the transformer.


Overall, the mic sounds warm and rich, although the metal can gives it a certain 'boxy' sound that instantly defines it as a very old microphone!

There is some more info about the BBC-Marconi ribbon mics at the Coutant and Orbem websites.

Thanks to Tom Barwood
Labels: BBC, Marconi, mic of the month