The MR1 was an attempt by Reslosound to re-invigorate the classic RB model for a 1970s market, whilst trimming down the cost of manufacturing parts and assembly.


The MR1 (left) has the same format as the RB, with the ribbon element and magnets housed in a tilting head attached to a cylindrical body that contains the transformer. The grills are now flat, rather than domed, and the custom pivot screw is replaced with a standard hex socket bolt.


The MR1 still usesd Reslo's custom 3-pin connector, and still makes ground contact through the body only. One assumes that this was to ensure backward compatibility with their older mics and cables, but it seems like madness  that they did not take the opportunity to switch to using XLR connectors, which were very well established by this time. 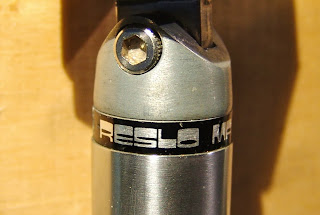 The classic stamped brass badge on the RB is replaced by a printed foil sticker that hides the join between the barrel of the mic and the cast base of the pivoting head. The sticker shouts 'Reslo MR1' - note that it no longer says 'Reslosound' - in a very trendy 1970's style font, with fattened letters typical of the era. I am also 1970s vintage, and the label reminds me of watching programmes like Magpie on TV in my childhood!


The ribbon and motor assembly (top in the picture below) is exactly the same as the RB, but the transformer is smaller. Over time, better understanding gave rise to alloys with higher magnetic permeability, enabling smaller transformers to be made with the same inductance properties.  The RB mics used a EE24/25 size core (pictured below the motor). The MR1 has a narrower body and a smaller transformer marked 4414.


Xaudia, as you might expect, make a suitable replacement transformer (bottom) for upgrade and impedance matching duties. ;)

Compared to the RB, I see very few MR1s, and can only conclude that they were not a great success. By the 1970s, good dynamic mics were becoming the first choice for home recording, and professional recording studios would probably favour condenser microphones for many applications. Reslosound Ltd. disappeared sometime in the 1970s, and this must have been one of the last models that they produced.
Labels: mic of the month, Reslo, Reslosound