And now for something completely different, let's look at a portable music player from a hundred years ago! 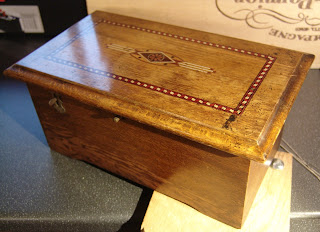 
Inside the box is a clockwork device very much like a music box, but the music is encoded onto a metal disc with teeth around its outer edge. 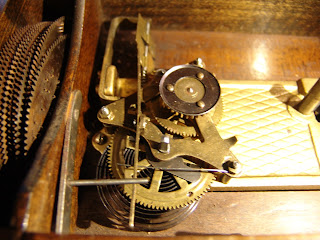 The disc is driven by a clockwork device, with a coiled spring providing the power, and a spinning regulator to keep the speed constant. 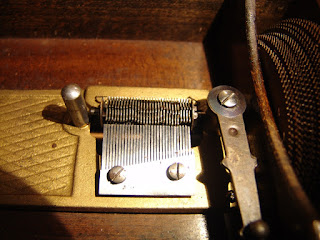 The disk drives a set of rotating gears, which in turn strike the tines of the comb to produce the sound. Each tine is a different length, and so a different note. The sound is then amplified simply by the resonance of the wooden box.


The discs are about the size of a CD, and the musical information is stored in them by punching and bending strips of metal so that they strike the music player. Each disc holds a mammoth 20 seconds of music, approximately. A few of the discs are rather rusty and bent, but the majority of them still play well enough.


Each disc is ink stamped with a number and the name of the tune. I have discs with numbers beyond 400, so this must have been a popular format with a wide choice of titles.

Here are some sound files  for a few of the discs. The sound is pretty and a little creepy at the same time, with all of the mechanical clicks and whirrs.  (mono .wav files around 3 Mb each, recorded with a Neumann TLM49 through RFZ KV80/1 preamp).


My aim is to record and share all of the discs that I have, so check back later for more.

Update....
I found this video on the web, which features the same player. The owner claims that it was made by the Swiss company Thorens in around 1910. One can imagine people taking this kind of music player along on a picnic perhaps, on a sunny summers day!

Mine seems to run a lot faster than this, so I may need to adjust the regulator.

Update 2...
Thanks to Alexander Schulz for sending in a link to the History of Thorens webpage.
Labels: music box, Polyphon, Thorens