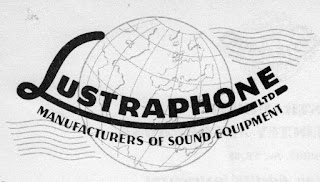 Lustraphone was one of several British companies making microphones back in the 50s and 60s. The catalog includes product sheets for several microphones and also some accessories such as mic stands and matching transformers. I was lucky enough to come across some old Lustraphone catalog pages, which included a product sheet for the VR53 ribbon velocity microphone and several other microphones. The catalog probably dates from 1952 or 1953. Note the four digit phone number!

Although the catalog mentions 20 ohm and 500 ohm models, I have also seen high impedance models of this mic. The frequency response is claimed to be "substantially maintained to 14000 Hz". From experience, I would say that 'substantially' is used loosely. The BBC have a bit more to say about this mic in their R&D reports.

As well as the VR53, the catalog also includes

I have uploaded a PDF of the full catalog here. (10 Mb).
Labels: Lustraphone