A few weeks ago we received this rather forlorn looking box of Melodium bits for service!


The good news was that all the important parts were there, and despite some corrosion, the magnets and the transformer were on good shape, which meant that this vintage gem could be restored to some of its previous beauty.


The mic was stripped down and all the parts cleaned up in the ultrasonic bath. Then the magnets and some other bits were painted to stop the rust returning, and the motor reassembled. Dino (the owner) wanted to retain the vintage look of the mic, so the grills were straightened, de-rusted and then given some clear lacquer rather than being refinished. New grill cloth gives some protection against pops and wind blasts. 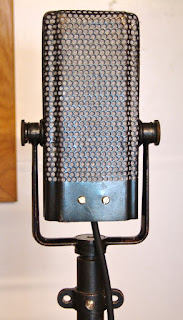 Then it was put back together and a new cable fitted with XLR output. And of course a new ribbon. The mic looks pretty damn cool!

Thanks to Dino Jakobsen of The Why Project.
Labels: Melodium, ribbon mic, Workshop