Here is a little curiosity. STC are mostly known for making high quality ribbon and dynamic mics, inclduing the much loved 4033 and 4038 models. But they also made condenser mics, and this nice little STC condenser mic came in for service recently....

It is model number 4136, and according to its specification sheet would originally have had its own power supply, which ran on either mains voltage or five 9 Volt batteries. Unfortunately the mic was bought without the power supply. The power would have been supplied to one pin of the XLR connector, ground to another, and (unbalanced) audio to the third.  The capsule has a sintered glass, metallised backplate. 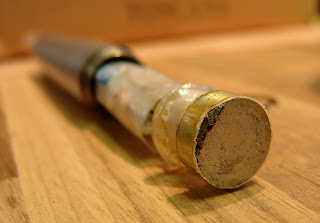 The battery supply suggests that 45V should be sufficient to power the mic. There was some corrosion on the circuit board from leaky capacitors, and without the original PSU, or knowledge of the operating voltage, it seemed sensible to create a balanced phantom powered circuit, loosely based on the Neumann KM84 - this is shown below along with the original circuit. 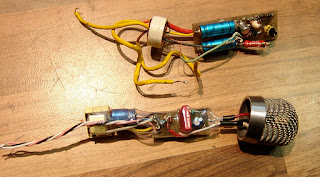 In practice, the conversion worked nicely, and despite its age and rough looks, the capsule gave a relatively even response, with a broadly cardioid pattern.