Sometimes I see patterns or trends in what arrives on the bench. A year ago it was RCA 74s, and in spring 2011 it was Electrovoice ribbon mics. And then the summer brought Melodium 42bs. Of course these are just statistical anomalies or 'blips' in the random noise of what my customers send me to repair, but it does at least suggest ideas for the regular 'Microphone of the Month' column.


This month these little Cadenza ribbon microphones are in vogue - these were made by Simon SoundService Ltd in London, and were designed by Eric Tomson, Stanley Kelly Peter Bell. The mics have a very 1950s styling, and are often called 'rocket' mics.  However, having spoken to a couple of customers, the consensus was that many of these microphones no longer sound as good as they should - or at least as good as they look. The complaints are that they are noisy, with low output. 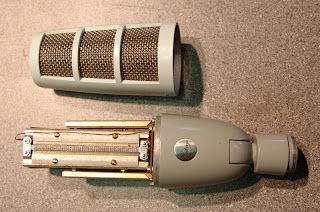 The Cadenzas have dual impedance outputs, and can be wired for either 30 ohm or high impedance  (80 KΩ) output by changing the wiring at the connector. Neither option is really ideal for modern studio use, where something between 200 and 600 ohms is much more common for a mic output. 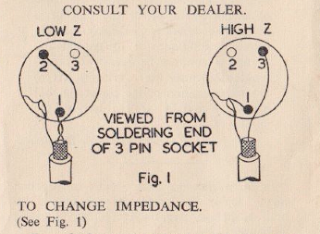 The ribbon itself is slightly unusual in that it has a fixed or nodal point half way along, where the ribbon is glued to an insulated support. This may well have been designed to reduce the likelihood of the ribbon being stretched, and one can imagine this either as two ribbons in series, or like a guitar string where the octave harmonic has been struck.


From a technician's viewpoint (i.e., my opinion :p), there are a some weak points in the design which all relate to the transformer. Firstly, the ribbon clamps are connected to the transformer simply by winding the wire under a nut and tightening it - really not a reliable long term approach. Secondly, the transformer wires are extremely thin, and half a century later the insulation becomes brittle and tends to break, with disastrous results. It is more common practice to use thick gauge wire for the fly-leads to the primary, to keep resistance and noise to a minimum. And finally, as these thin wires become old and oxidised, the mics become noisy. 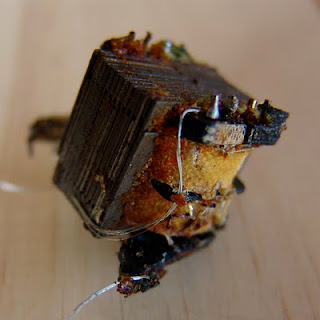 This all points to a transformer upgrade or rewind. However, it seems that Simon Sound Services Ltd. did a better job of encapsulating the transformer than they did of connecting it to the ribbon. The tranny is glued inside a mu-metal can with a hard, clear resin that resists removal. It was necessary cut the metal shell in half and then to soak the resin in dichloromethane for 48 hours to remove the resin. This allows removal of the laminations and a better inspection of the transformer windings.


The outer high impedance winding is a very fine gauge (approx. 0.07 mm), below which is a single layer of 0.4 mm wire which makes up the primary. The innermost winding is the 30 ohm output, which is approximately 0.2 mm in diameter. Unfortunately the solvent also damaged the bobbin, and and a replacement was found to make a new transformer using the vintage laminations. 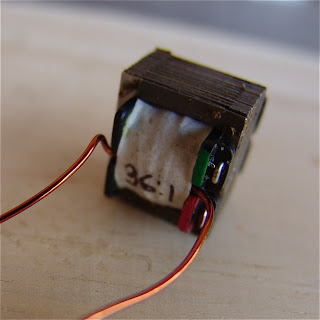 The new transformer has a single 600 ohm output, with thicker gauge wires to give lower resistance.  It took some effort but the result is a higher output with a lower noise floor, and the mic is much more usable. I'll post back with a 'before' and 'after' frequency plot for comparison.

The manual for the Cadenza mic is here.