Here is a nice looking Reslosound VMC2 microphone, successor to the VMC, which (probably) stands for Velocity Moving Coil.

As far as I can tell, the only real difference between the original VMC and this VMC2 is that the newer model has a slightly different grill, and a three pin Reslo output socket instead of a fixed cable. Inside, both mics have the same heavy paper diaphragm and coil.


The badge proudly declares that this specimen is a low impedance 15 ohm model. 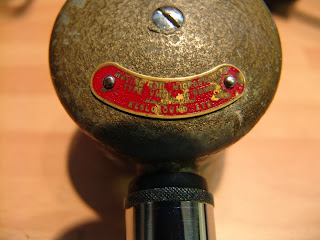 Reslosound used a fibrous paper to manufacture the diaphragm, and the coil is simply glued to the paper tube at the rear. In fact the technology looks very similar to early speakers.

When I plugged it in, the mic gave a very lo-fi sound - even more distorted than one would expected for this era. On investigation, there were some metallic particles sticking to the diaphragm, preventing it from moving freely. The paper cone had also become detached from the diaphragm.

Once the obstructions have been removed, the cone was then lightly glued back using some clear nail varnish, and then replaced in the magnet gap, ensuring that it was centred and free to move. This greatly reduced the distortion.


In use, the mic is slightly boxy sounding, with a steep roll off at the bottom end and some dramatic peaks and dips in the response. It very obviously sounds like an early dynamic mic!


For comparison, here is a Reslo VMC with announcer's base station. Note the difference in the grill, with five horizontal slats, as opposed to three vertical.
Labels: dynamic, Reslo, Reslosound