Ribbon Mics in Action: Tidal Love by Nothing Places

Thanks to Oswaldo Terrones, who works in Madrid and Barcelona in Spain, for sharing the album Tidal Love by alternative rockers Nothing Places. 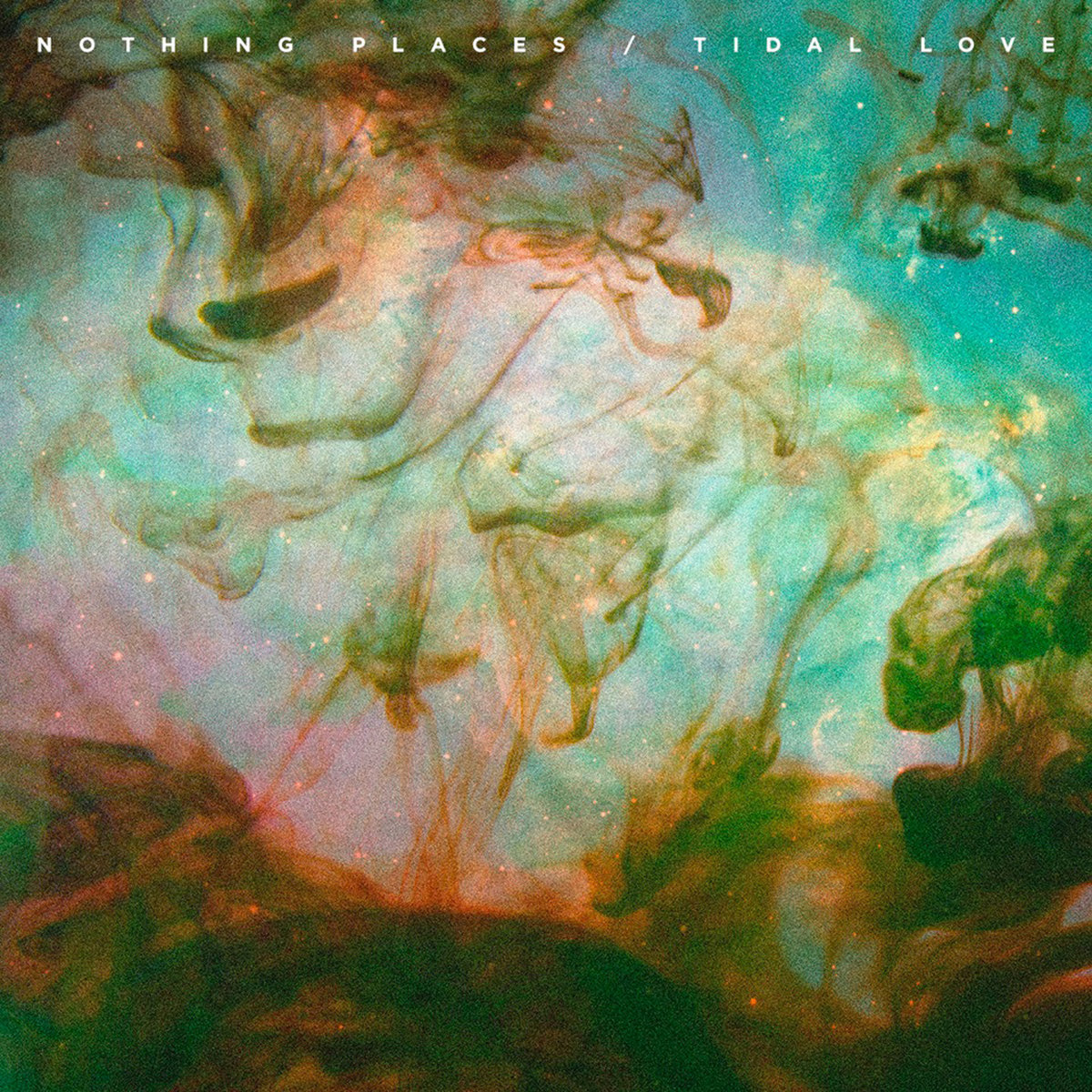 Oswaldo made extensive use of ribbon microphones for the recordings, using a B&O BM5 stereo set for the drum room mics, an RCA 74B for guitar cabinets, Coles 4038 as the overhead and Beyer 160s on the lead guitars, percussion, etc. The music itself defies description, but you can listen for yourself at their bandcamp page.

The album was released on Spanish indie label Foehn Records, which champions new artists and "the less traditional facets of pop, rock and electronics."

Having myself once tried (and failed) to run a little record label, I have the utmost respect for those who have the tireless enthusiasm to make it work!
0 comments Labels: In Action 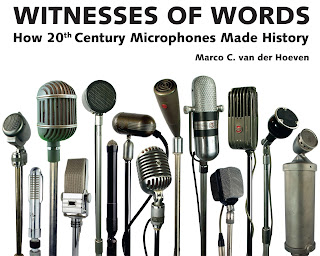 This beautiful book arrived in the post last week. There aren't enough good books about the history of microphones, so it was a pleasant surprise to discover that Marco van der Hoeven had written this wonderful volume. Marco is a musician, engineer and historian, and he has a very impressive collection of microphones too. 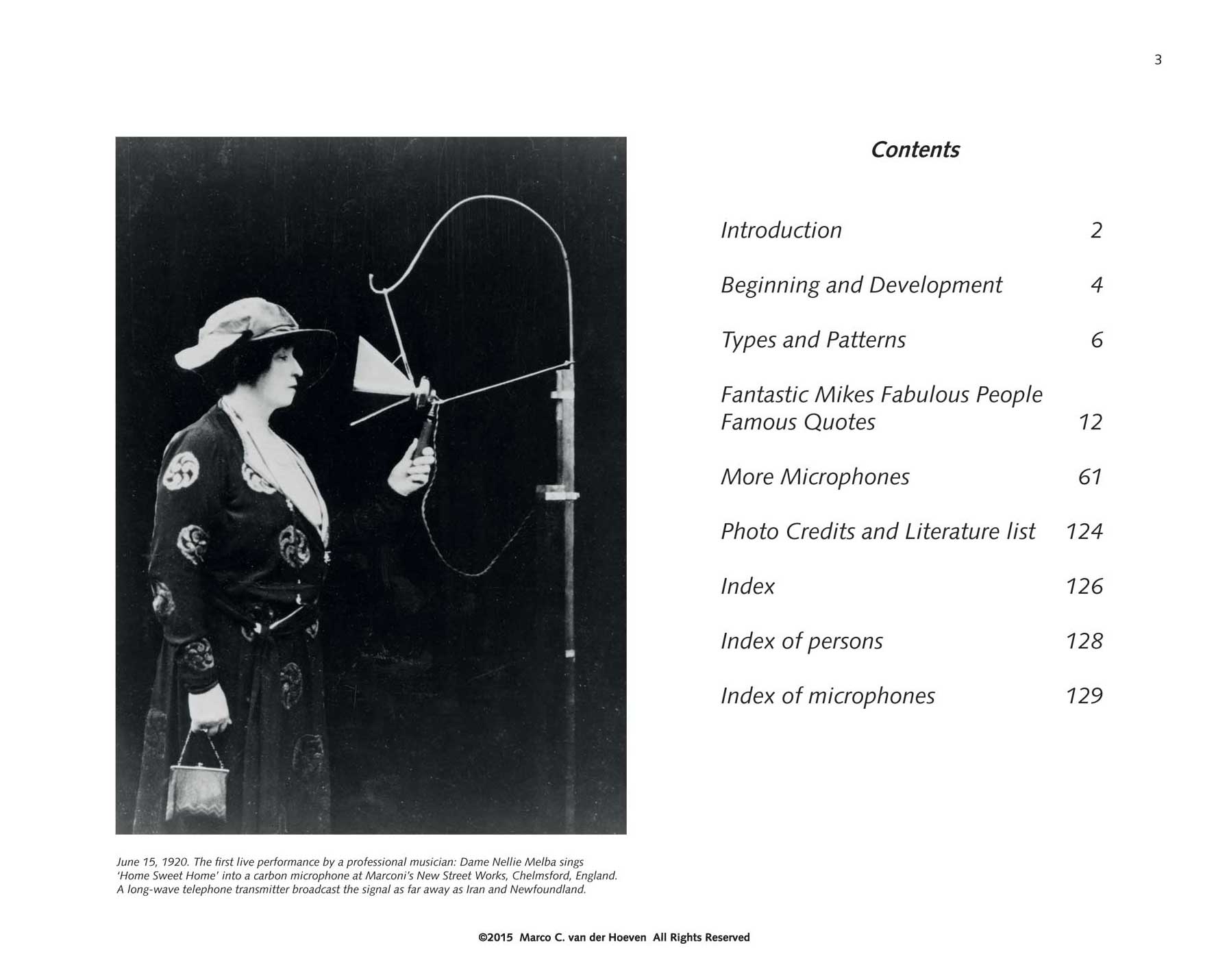 But Marco's book is much more than a history of the microphones themselves - it is also a potted history of the 20th Century, as witnessed by the microphones of the era. Whenever and wherever a crowd was rallied, a war started or a peace brokered, there was a man or a women addressing the public - with a microphone and some kind of PA system. 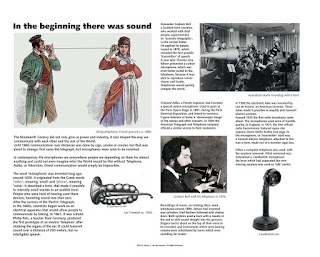 A large part of the first half of the book shows how microphones were used by some of history's heroes and villains -  scientists and singers, actors and astronauts, dictators and comedians alike are shown with the current technology.

Marco identifies who used which microphone, and gives little discourses about them and why they did so. Perhaps many readers may already know that Hitler favoured the Neumann bottle-shaped microphones, but here you can also find the microphones used by Mahatma Gandhi, Margaret Thatcher and Marilyn Monroe, amongst many others. 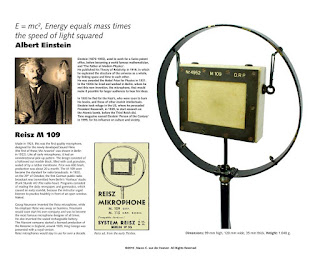 And often the choice of equipment would have made a political statement: for example, Charles de Gaulle is shown addressing a liberated crowd through a Melodium 42B. It was very important for the new leader of a country recently freed from occupation during WW2, to be pictured with a French microphone.

The book is rich in detail, anecdotes and Marco's unique perspective, showing his passion for the history of recording and broadcast, and a wider view of its global context.

All the microphones shown are part of his own impressive collection, which includes everything from rare examples that would be at home in a museum, through recording studio and broadcast classics, to numerous small, cheap microphones that might have been used for amateur radio, taxi ranks and tape recorders.

This reminds us that most people who needed to communicate did not always need a Neumann or AKG recording classic, and had probably never even heard of them!

The latter pages of the book show numerous, diverse examples, along with various microphone-related paraphernalia such as advertising documents, stamps, toys and record sleeves. It is the combination of the social, historical and technical perspectives that makes this book unique. And it would make a great Christmas present for the microphone lover in your life!

Witnesses of Words is available for €27.95 from WitnessesOfWords.com
0 comments Labels: Review

Toshiba are well known for making mid-range consumer electronic equipment. Once upon a time they used to make some fine ribbon microphones too!


The microphone on the left is generally know in internet-land as the Toshiba 'Type A', although it is labelled SN-1631. It is a very close copy of the RCA 44A and its relatives. I have been informed by a Japanese expert that this was made under license by RCA, most likely in the post-WW2 era. Having looked carefully at the Type A and compared it to my own RCA PB144 (right), I have no reason to doubt this assertion. 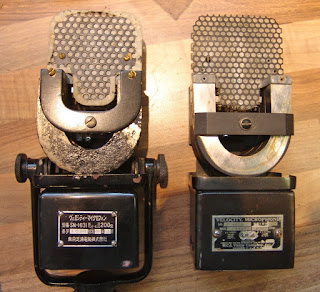 The mics look similar outside - my PB 144 has a film set style hanger mounting, whist the Toshiba has a simple cast yoke, and the grill hole size differs. 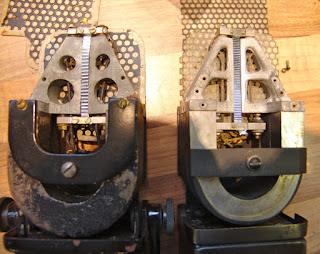 Inside the microphones there are many similarities and few differences. Both use three large horseshoe magnets to provide the magnetic field, and and the ribbon dimensions are very close. 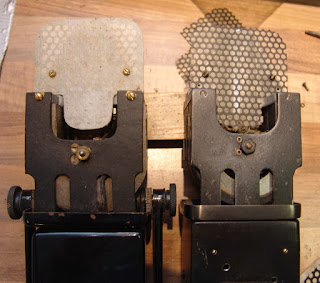 Perhaps the biggest difference is that the RCA uses cast pole pieces, whereas in the Japanese version they are milled. This probably reflects the tooling and machinery available at the time. Casting is an expensive process for low quantity products. 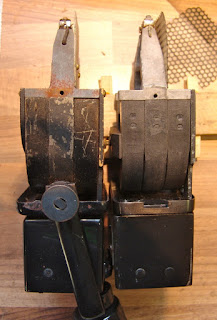 Beyond the cosmetics, the Toshiba has a 200 ohm output transformer whereas my PB 144 is a 50 ohm microphone, with these no doubt being in line with the broadcast standards of Japan and USA at that time.

(Thanks to Takayoshi Sumitomo for his expertise)

Is the MB301 Cardioid ribbon microphone a Beyer in disguise?

I recently had the opportunity to service a pair of MB301 cardioid ribbon microphones. I had always understood these to be rebranded Beyer M260s with a custom grill, but this is not the case. 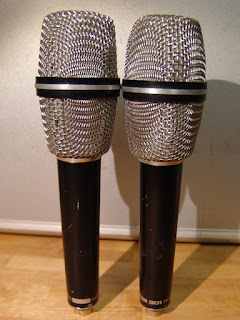 The MB301 does use a Beyer pistonic ribbon, but the motor is completely different. The Beyer M260 uses four glued rectangular magnets to make the motor,  but the MB301 employs a single large cast ferrous horseshoe magnet. In this respect it looks more like an RCA BK5 or Oktava ML19.


I think it more likely that the magnet is taken from the Beyer M320 / M360 models, with different pole pieces, although I have not had the chance to compare these on the bench at the same time. Either way, the MB301 is a microphone in its own right, and not a copy of something else. 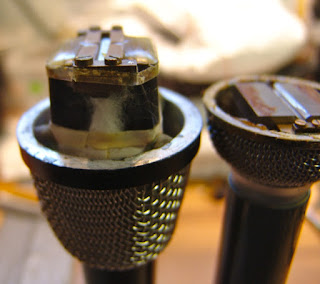 Despite the ugly oversized grill, they sound pretty good with plenty of top end and bass, and the big magnets give a stronger output signal than the early M260s.
0 comments Labels: Beyer, beyerdynamic, MB