A hexaphonic pickup lets you record you record the signals from each string separately, either through six amplifiers, or perhaps more sensibly by recording directly through instrument inputs or DI boxes. This gives a lot of creative possibilities.

For example, here's a G major chord, played lazily from the low strings to the high. This was recorded directly into Protools, with the notes spread across the stereo width.


Adding an amp simulator gives it some body...


With a hexaphonic recording, it is simple to change the timing of individual strings. Imagine that we wanted the chord played tightly, rather than note by note. A quick edit and here it is...


Or perhaps we would prefer to strum from the top to the bottom instead. No problem - we can just shift the notes slightly and we have it ...


And by reversing the waveform of three strings and repeating the notes, we get this little ambient loop. A semi-reversed guitar


Now let's get silly...
... we want to transpose part of a song, but the guitarist has gone to the bar. We can use Autotune on each track to pull each string up by two semitones to play an A major instead.  Here's how it looks on the screen... 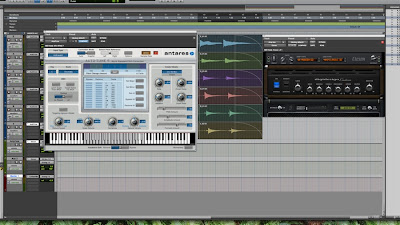 And here's how it sounds!

Auto-tuned Chord - Gmajor to A major

By shifting the G-string up by one semitone rather that two, the chord becomes an A-minor. Now that's something which can't be done with simple pitch shifting!

Auto-tuned Chord - Gmajor to A minor!