Today we took delivery of some interesting microphones from Italy. Here they are with some other resident Italians.


From left to right we have ribbon mics by Geloso, Framez, Do-Re-Mi, CM, Magneti Marelli, Riem and Meazzi.  On closer inspection it seems as though some of the different brands came from the same factories. 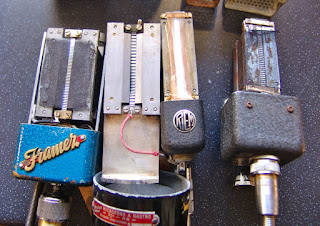 The motor of the Do-Re-Mi mic is the same as the Framez, and the Riem is a skinny version of the Meazzi. We also know from previous research that Framez and Meazzi were related companies. Magneti Marelli made 74B copies under license from RCA. 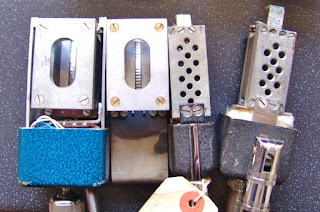 We know less about the RCA-shaped CM microphone. In fact nothing at all about it, other than it is a fairly standard design, made for public address use.

It seems as though there was once a a thriving ribbon mic industry in Italy, with numerous brands and models, but I don't know of any modern Italian ribbon mics.

Update: I found this ad for the Riem ribbon microphone, from the magazine Selezione Radio, Feb 1952.